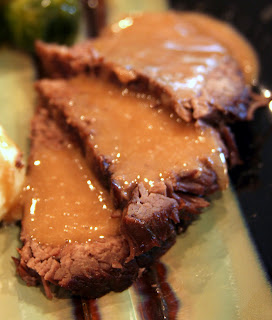 I seem to be on a kick lately with recipes from my family's past.  Tonight I made something I have never had before: sauerbraten.  This is another recipe that we lost when my grandmother died, and I have been trying to find something to replace it.  I originally saw this recipe in a collection of recipes from a church in Baltimore, so I'm hoping this is pretty close to the original.  My mom says it has been so long though, she doesn't remember if it is the same!

Coming from someone who has never tried it, this roast is something completely different.  You definitely have to like sour things, because it's sour.  Oddly beefy and tender, yet sour.  I'm still not sure what to think. It definitely helps putting the gingersnaps in the gravy, and I'm thinking maybe even some cream wouldn't hurt.  I think I could get used to this...

Place the meat in a large deep bowl.  Combine the vinegar and next 9 ingredients; pour over the meat.  Cover; refrigerate 36 to 48 hours, turning meat twice each day.

Lift meat from bowl; pat dry with paper towels.  Rub lightly with flour.  Heat the oil in a large skillet over moderate heat; brown the meat well on all sides.  Put the meat in a large Dutch oven.  Strain the vinegar marinade and add 2 cups to the meat.  Cover and simmer for 3 hours.