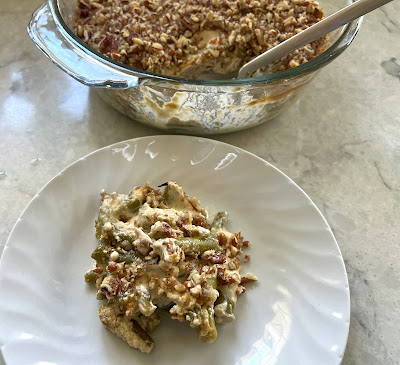 A while ago I picked up a comb-bound cookbook for a restaurant called The Little Mushroom, which after a little research, was apparently a very popular little place here in Dallas during the 70's.  I'm all about some nostalgia, so I bookmarked some of the recipes that sounded more like than not to turn out pretty well.  This is my first attempt, and other than the almost overbearing Dijon mustard flavor, it was actually quite good and definitely easy for a week night when the same old green bean casserole just isn't doing it for you.
Note: I used the full 3 tablespoons of Dijon mustard that the original recipe called for, and it was quite...strong.  I would probably go with 2 from now on, unless I was cooking for someone who just really needed their sinuses cleared.

Baked Green Beans Dijon
From Favorites from The Little Mushroom

Preheat oven to 350°F.
Combine the first seven ingredients and mix well. Place the green beans in a baking dish and cover with the sauce mixture. Bake for 15 minutes. Top with the pecans and bake for 10 minutes more.