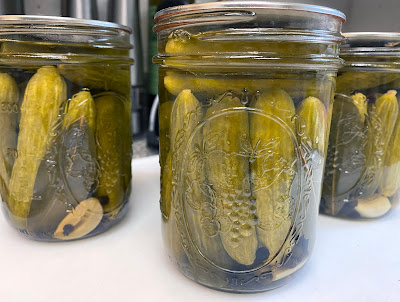 When I went to the store yesterday, and I saw these little tiny cucumbers for sale, you can bet I was instantly thinking about how I would put them into jars and make the cutest little pickles you've ever seen.  I was afraid it was going to be quite a process, but these little pickles came together very easily.  Now I just have to wait a month before I can see how delicious my handiwork is!
Note: I chose not to include the onion.
Classic French Cornichon Pickles
From The Spruce Eats blog
2 pounds fin de meaux cucumbers (2 inches long is best)
½ cup kosher salt, divided use
2 cups distilled white vinegar
2 cups water
1 tablespoon white onion, finely chopped
1 clove garlic, peeled and halved
1 teaspoon fresh dill, chopped
1½ teaspoons black peppercorns
2 cloves
2 bay leaves
In a large bowl, toss the cucumbers in ¼ cup plus 2 tablespoons of salt.  Arrange the cucumbers in a single layer on paper towels or clean kitchen towels to allow the salt to draw the moisture out of the cucumbers. Let sit for 90 minutes, then rinse the cucumbers thoroughly.

Sterilize two pint jars, along with their lids and rings, and keep them hot until ready to fill with the pickling mixture.

In a medium, non-reactive saucepan over medium-high heat, bring the vinegar, water, and remaining 2 tablespoons of salt to a boil.

Divide the onion, garlic, dill, peppercorns, cloves, and bay leaves between the two sterilized jars.  Pack the cucumbers into the jars, leaving ½-inch of headspace.  Fill the jars with the hot vinegar mixture, leaving ¼-inch headspace from the top of the jars.

Tap the jars to remove any air bubbles, cap the jars, and process them for 10 minutes in a boiling-water canner.  Cool the jars and store them in a cool, dark place for at least 3 to 4 weeks before opening.
Makes 2 pint jars
Posted by Sara at 2:12 PM