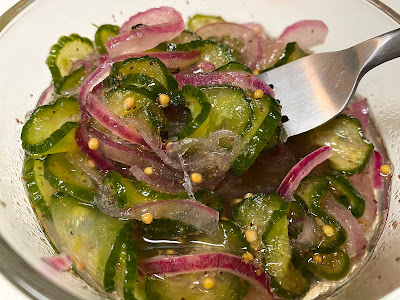 One time when I went to a family event, my sister brought out these little pickles for us to snack on.  And I thought, okay, it's pickles.  But then I tried one.  And there was something so addictive about them.  And I found myself eating more of them.  And more.  And then it was like I only wanted pickles.  So I asked for the recipe.  And I made a big batch just for me.  And yes, I had pickles for dinner tonight.  I am not ashamed, although I probably should be.
Note: I used a mandoline to get perfect even slices, but these pickles probably won't last long enough for that to matter.
Homemade Freezer Pickles
Adapted from The Chunky Chef blog
1 pound mini pickling cucumbers, thinly sliced
1 red onion (approximately ⅓ pound), peeled and thinly sliced
1 tablespoon kosher salt
1 cup granulated sugar
½ cup apple cider vinegar
1½ teaspoons mustard seed
1½ teaspoons celery seed

Add cucumbers and onions to a large non-reactive mixing bowl. Sprinkle with kosher salt and stir to combine. Let sit for 1 hour. Transfer mixture to a colander to drain, then rinse to remove excess salt. Wipe out the same mixing bowl, then add drained and rinsed cucumber mixture back to the bowl.
In another small mixing bowl, combine sugar, apple cider vinegar, mustard seed, and celery seed. Stir together to combine. If the sugar isn't mixing well, add bowl to the microwave (make sure it's microwave-safe!), and heat for 30 seconds or so, until the sugar will dissolve into the vinegar when stirred.

Pour liquid over the cucumber mixture in the bowl and stir to combine. Cover tightly and refrigerate for 1 full day. Transfer freezer pickles to freezer-safe containers and freeze for up to 6 months.

To eat: Thaw pickles out in the refrigerator overnight. Once thawed, pickles should be eaten within 2 weeks. Enjoy on their own, on top of a burger, on top of hot dogs, on top of sandwiches, or however you'd like!
Note: Pickles can be frozen in glass containers (leave about ½-inch of headroom at the top to allow to expansion), plastic containers, and freezer-safe resealable plastic bags.
Makes approximately 3 cups
Posted by Sara at 7:49 PM