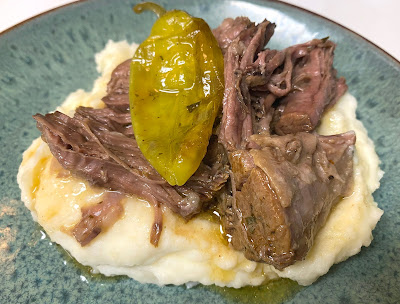 There's recipes all over the internet for this particular dinner, which is partially why I avoided making it for so long.  That was dumb of me.  This is a delicious dinner, and it takes almost no effort.  And it doesn't heat the whole kitchen up, which is another win.  I made mine a little spicier than usual because I picked up a packet of spicy ranch by accident, but it was honestly pretty good, so that's also an option if you like the spicier side of life.

Place the chuck roast in the crock of a slow cooker.  Scatter the pepperoncini peppers around the meat.  Sprinkle the meat with the packet of ranch seasoning and au jus seasoning, then pour the water and pepper juice over the top.  Place the stick of butter on top of the meat and cover the crock.  Cook on low for 8 hours.  At the end of the cooking time, use two forks to pull the meat until chunks.  Serve with rice or mashed potatoes and drizzled with the cooking liquid.
Makes 4 to 6 servings
Posted by Sara at 7:05 PM