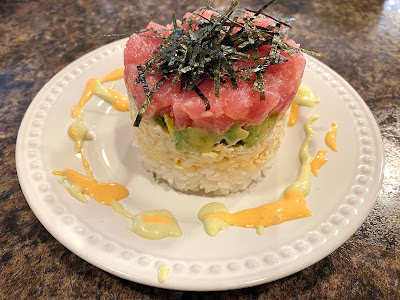 My six year old nephew was asked what he wanted to eat for his birthday.  And what did this child say?  Not hamburgers.  No sirree.  He said TUNA TOWERS.  I'm not sure why I'm surprised, since I was there when he was much younger, stuffing sushi in his face while the server at the restaurant looked on open-mouthed.  But that request meant that someone would have to make said tuna towers.  So after much googling and scrutinizing of pictures, I came up with this.  And it was actually pretty delicious.

Note: I used a 3-inch tall by 3-inch diameter round mold that I got on Amazon, but any similarly sized mold would work.  Also, if you can't find kizami nori, you could use sesame seeds, masago/tobiko, or fried wonton chips as a topping instead.

Make the sushi rice per the recipe and set aside until time to put the tuna towers together.

In a small bowl, combine the crab meat with about half of the spicy mayonnaise, adding additional if necessary.  You want to make sure you have enough spicy mayonnaise left to serve on the side while still making sure the crab is well-coated.  Set aside.

Combine the cubed raw tuna with the sesame oil and salt, mixing well.  The tuna should just be glistening; you don't need to coat it in sesame oil.  Set aside.

To make the tuna towers, using a round mold, wipe the metal mold very lightly with vegetable or sesame oil and place it on the serving plate.  Spoon in a layer of sushi rice, then crab, then avocado, then tuna on top.  Each layer should be about ¼ of the height of the mold.  Press lightly on each layer as you build.  To remove the mold, press lightly on the tuna layer with the back of a spoon while grasp the mold and pulling up with your other hand.  The oil should allow the mold to slow slide off, leaving the tower behind.  Top with nori shreds, and garnish with additional spicy mayonnaise and the wasabi cream sauce.