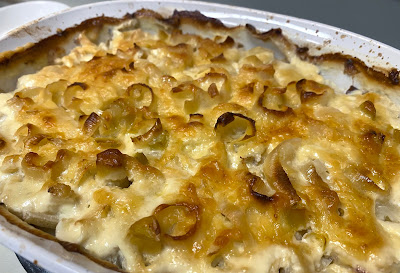 I'm really desperately trying to eat more of my meals at home, and as part of that effort, I've been ordering more vegetables in my groceries.  However, when dinner time is looming, the prospect of having to put together something complicated (like hollandaise sauce!) is a bit overwhelming.  This is actually a super simple way to slap together some cauliflower and cheese, but it also has the benefit of using up any spare leeks you have lying around.

Heat oven to 425°F. Slice cauliflower head lengthwise into ½-inch thick slices, including the core and leaves. (Some smaller bits will fall away: That’s fine. You’ll use them as well.)

Bake until cauliflower is nearly tender, 10 to 15 minutes. Remove foil and continue to bake until cream has thickened and reduced nearly completely and the top is golden brown and crisp, 35 to 40 minutes. Remove from oven and let cool slightly before eating.