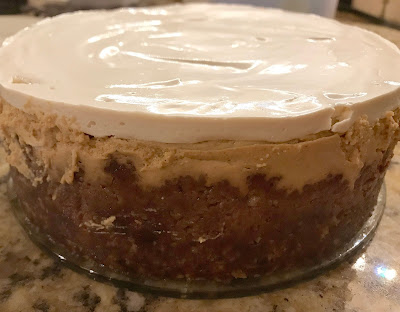 Since Thanksgiving is coming, I figured it was time to start cooking.  And since I've got some people in my family that can't handle a ton of carbs, I decided to try something a little less antagonistic.  This recipe is actually a combination of the best of three or four recipes, adjusted to taste by me.  And I've got to say - it turns out an amazing pumpkin cheesecake.  So good that I would actually elect to eat it over other options, even though it technically has no flour or sugar.  In fact, I hesitate to even draw attention to that fact, since some people will automatically decide it must be tasteless.  I promise it's not.  It's fantastic.  And don't be scared of the dates if you've never used them before.  They hold the crust together in beautiful, naturally-sweetened perfection.

Note: Cooking this cheesecake in the Instant Pot yields an incredibly moist and tender cheesecake.  It may not look quite done when you pull it out, but just trust the process, and you'll reap the benefits.

Gently press the mixture into the bottom and slightly up the sides of an Instant Pot silicone springform pan.  Bake the crust in the preheated oven for 5 to 6 minutes, just until the edges start to brown.  Set aside to cool.

Using a stand mixer on medium-high speed, blend the cream cheese, pumpkin, maple syrup, half-and-half, pumpkin pie spice, cinnamon, nutmeg, and vanilla extract. Blend thoroughly, while scraping the sides of the bowl until completely combined and creamy.  Add the eggs, one at a time, gently mixing on low until just combined without over-beating.


Cover the outer bottom of the springform pan with the crust with a sheet of tin foil to keep water from seeping into the cheesecake. Pour the pumpkin cheesecake filling into the pan over the crust.

Place a trivet in the bottom of the Instant Pot.  Pour 1½ cups water into the inner pot, then set the cheesecake onto the trivet, making sure the pan is level.  Close and lock the lid on the Instant Pot. Turn the pressure valve handle to Sealing.  Select Pressure Cooker (Manual) on High Pressure. Set the timer for 58 minutes.

While the cheesecake is cooking, in a small bowl, whisk all the topping ingredients until blended, then cover and refrigerate.

Once the cooking time is complete, use the Natural Release method for 25 minutes, and then quick release any remaining pressure.  Remove the lid and lift the cheesecake out of the Instant Pot.  If water has accumulated on top of the cheesecake, gently blot it with a paper towel.  Let the cheesecake cool on the counter for an hour.

While cheesecake is still warm (It’s okay if the center looks less firm and jiggly), spread the sour cream mixture topping over it.  Cover the cheesecake pan with aluminum foil and refrigerate for 12 hours or more until firm.  Carefully and gently release the outer spring ring of the springform pan and serve.
Posted by Sara at 9:27 PM