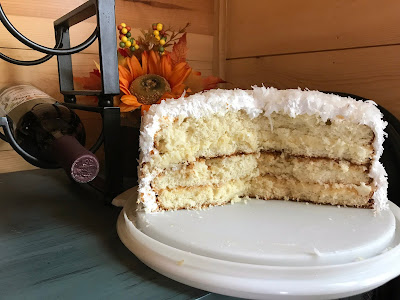 It was recently my father's birthday, and I asked him what cake he wanted.  After much hemming and hawing, I finally got him to admit that he wanted a coconut cake.  Not just any coconut cake, mind you.  THIS coconut cake.  No returns, exchanges, or substitutions.  And what the birthday boy wants, the birthday boy gets.  We normally have this cake at Christmas, since it basically resembles a giant snowball, but it's good all year 'round.

Note: The recipe originally called for a fresh coconut, but my mom has always used a bag of sweetened flaked coconut in substitution.  I think it works just fine since the cake and filling isn't super sweet to begin with, but fresh might be nice.

Shred the coconut (if using).  Preheat the oven to 375°F. Grease and flour two 9-inch round cake pans.

Into a large bowl, measure the flour, sugar, shortening, milk, eggs, baking powder, salt, and vanilla; with mixer at low speed, beat until well mixed, constantly scraping the bowl with a rubber spatula. Beat at medium speed for 5 minutes. Pour the batter into the prepared pans and bake for 25 to 30 minutes or until a toothpick inserted in the center comes out clean. Cool the pans on racks for 10 minutes and then remove the cakes to the racks and cool completely.

Prepare the custard filling. Stir 1 cup shredded coconut into the chilled custard filling; with a sharp knife, cut each cake horizontally in half. Prepare the Snow Peak Frosting. Place the first layer of cake on a cake plate, cut-side up; spread the cake with about ⅓ of the filling. Repeat the layering, ending with a cake layer top-side up. Frost the sides and top of the cake with Snow Peak Frosting. Sprinkle the sides and top of the cake with about 2 cups of shredded coconut. Refrigerate.

In a heavy 2-quart saucepan, with a wire whisk, mix well all of the ingredients until well blended. Over medium heat, cook, stirring constantly, until the mixture thickens, about 10 minutes. Cover the custard’s surface with waxed paper; refrigerate until well chilled, about 1½ hours.

In a 1-quart saucepan over medium heat, heat the corn syrup to boiling; remove the pan from the heat. In a large bowl, with the mixer at high speed, beat the egg whites and salt just until soft peaks form. Slowly pour in the hot syrup; continue beating for 6 to 8 minutes until the frosting is fluffy and forms stiff peaks when the beater is raised. Beat in the vanilla extract.
Posted by Sara at 10:51 PM