Against All Grain: Banana Muffins with Chocolate Chip Streusel Topping 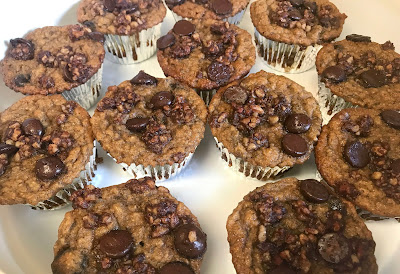 After many happy years stuffing my face with white flour and granulated sugar, I'm slowly being converted to the benefits of maybe cutting those particular ingredients back a tad.  I'm especially interested if I can find a recipe that turns out something nearly as delicious as the original.  These little banana muffins are surprisingly delicious considering there's not a speck of flour or sugar to be seen.  Even if you're not practicing paleo - these would be a good choice for a healthier breakfast.

Note: I used big baking chips instead of minis because that's what I had, but my boyfriend thinks they worked just fine (read: big chocolate flavor).

Using a paddle attachment in a stand mixer, cream together the coconut oil, honey, and vanilla until is light and fluffy.  Add your eggs one at a time, mixing well after each one. Add in the apple cider vinegar.

In a separate bowl, combine the flours, cinnamon, baking soda and salt.  Slowly incorporate the dry ingredients into the wet ingredients, scraping down the sides of the bowl if necessary.  Mash the bananas and the milk in a bowl until it has reached a similar consistency to baby food. Fold the banana mixture into the batter and the chocolate chips if you’re using them.  Spoon the batter into lined muffin tins or reusable silicone muffin cups. Fill to about ¾ full.

For the streusel topping, chop the pecans, honey, and cinnamon in a blender or food processor until finely chopped. Mix in the chocolate chips, then sprinkle the mixture over the muffins.
Bake for 15-20 minutes, until the tops have browned lightly and a toothpick comes out clean.