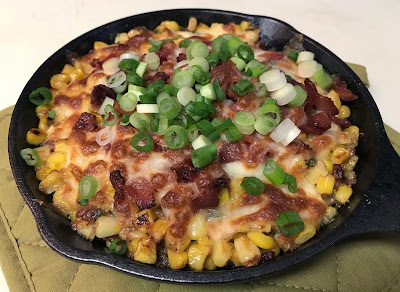 When I saw the chef making this skillet of deliciousness one weekend while I was half-watching the TV, I dropped what I was doing.  I mean, this is sweet corn, smothered in bacon and cheese.  That is right up there with brownies and perfect mashed potatoes.  The chef claimed this was some sort of Korean bar food, but I never saw this when I lived in Seoul.  If I had, it would have been my dinner EVERY NIGHT.  If you want to bump up the spice level a bit, I think you could hit this with some sriracha and all would be right with the world.

Ba'Corn Cheese
From The Bun Shop, as seen on Diners, Drive-Ins and Dives

Place a 5- or 6-inch cast-iron skillet in the oven; preheat the oven to broil.

With a towel, grab your hot skillet from the broiler and carefully pour in the corn-cheese mixture. Sprinkle the remaining ¼ cup mozzarella over the top and set under the broiler until golden brown, 30 to 45 seconds. Garnish with the remaining scallions.