Mom on Timeout: "Turkey and Stuffing" Meatballs with Herbed Gravy 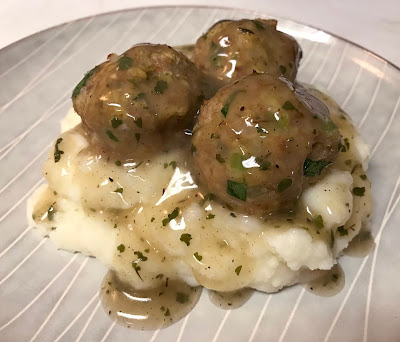 I don't normally like turkey meatballs.  Mainly because they're tasteless.  Ground turkey just doesn't have much flavor, mostly due to the fact that it's low in fat.  And fat = deliciousness.  So how to bump up the flavor profile?  Dump in a packet of sodium.  I'm sorta not even kidding.  I used an entire package of stuffing for these meatballs, and they were fantastic.  Serve them with mashed potatoes and gravy?  Even better.

Preheat oven to 400°F.  Line a baking sheet with parchment paper and set aside.

Melt butter in a small skillet over medium-high heat.  Add the onion, celery, and garlic and cook until tender, about 6 minutes.  Set aside to cool slightly.

Place stuffing mix in a resealable Ziploc bag and crush lightly with a rolling pin or mallet. In a large bowl, combine stuffing crumbs and half-and-half and stir to combine. Mix in cooked onion and celery mixture, parsley, egg and egg yolk, salt, and pepper.  Add ground turkey and mix gently just until combined.

Using a 1½ tablespoon cookie scoop, form meatballs from the mixture. Use your hands to gently form into a ball and place on prepared baking sheet. Drizzle with olive oil. Bake for 15 to 20 minutes or just until cooked through.

In a small bowl, combine gravy and herbs.  Heat according to package instructions.  Serve with meatballs and mashed potatoes.
Posted by Sara at 7:35 PM