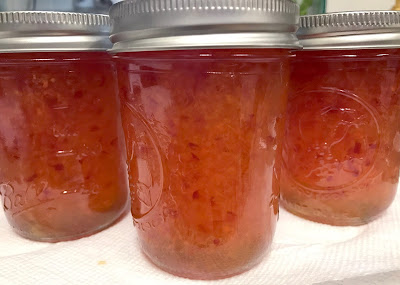 After I made my jalapeño jelly late last summer, I broke it out at Thanksgiving thinking my brother-in-law would be a huge fan.  After all, he had talked about how much he loved pepper jelly.  Well, let's just say he was less than enthused, and I couldn't figure out why that might be.  At least until he forwarded me the recipe for "pepper jelly" that his good friend used.  Then it dawned on me - his idea of pepper jelly included habanero peppers, not those timid jalapeños.  My mistake, but easily corrected.


Stir the vinegar and sugar in a saucepan over medium-high heat until the sugar has dissolved, then stir in the carrot and red bell pepper. Bring to a boil, reduce heat to medium, and simmer 5 minutes. Add the habanero peppers and simmer 5 minutes longer. Pour in the pectin, and boil for 1 minute, stirring constantly. Skim and discard any foam from the jelly.

Sterilize the jars and lids in boiling water for at least 5 minutes. Pour the jelly into the hot, sterilized jars, filling the jars to within ¼-inch of the top. Wipe the rims of the jars with a moist paper towel to remove any food residue. Top with lids, and screw on rings.

Place a rack in the bottom of a large stockpot and fill halfway with water. Bring to a boil over high heat, then carefully lower the jars into the pot using a holder. Leave a 2 inch space between the jars. Pour in more boiling water if necessary until the water level is at least 1 inch above the tops of the jars. Bring the water to a full boil, cover the pot, and process for 5 minutes.

Remove the jars from the stockpot and place onto a cloth-covered or wood surface, several inches apart, until cool. Once cool, press the top of each lid with a finger, ensuring that the seal is tight (lid does not move up or down at all).