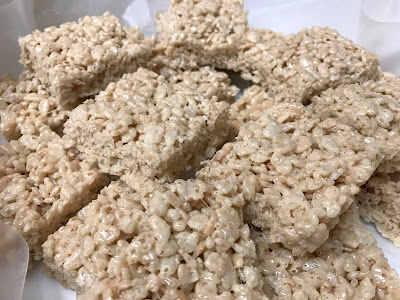 At a lunch last week at Nick & Sam's Grill, the table was given a specialty dessert that included blueberry ice cream, cotton candy, and browned butter Rice Krispie treats.  I know, sounds crazy, and it was...crazy good.  But I kept thinking about those Rice Krispie treats.  I had never really eaten many as a child, so I don't have any sort of attachment.  But an adult version?  With browned butter?  And maybe some vanilla bean?  That definitely happened today.  Guess who's now a fan?

In a large pot, melt butter over medium-low heat. It will melt, then foam, then turn clear golden and finally start to turn brown and smell nutty. Stir frequently, scraping up any bits from the bottom as you do. Don’t take your eyes off the pot as, while you may be impatient for it to start browning, the period between the time the butter begins to take on color and the point where it burns is often less than a minute.

As soon as the butter takes on a nutty color, stir in the marshmallows. Melt and cook, stirring often, until mixture turns pale brown, then stir constantly until lightly browned but not dark, 3 to 5 minutes.  Stir in the vanilla bean paste.

Remove the pot from the stove and stir in the salt and cereal together. Quickly spread into prepared pan using a silicon spatula or buttered hands.  Let cool and cut into bars.