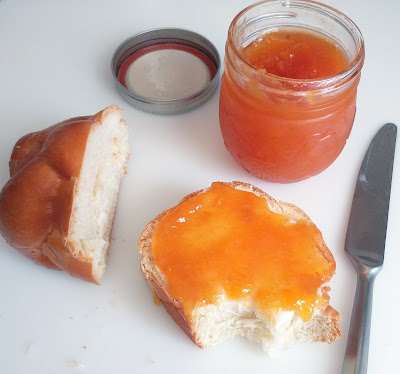 When I got to the farmer's market this morning, I went to my usual stall to get some goodies.  And they had big baskets of fresh peaches that smelled amazing.  Immediately I started imagining gleaming jars of peach jam.  Well, the farmer made me a deal I couldn't resist.  I got a big bag of less-than-perfect peaches that were the ripest, sweetest peaches I've had in years.  So what did I do?  I made them even more delicious by dumping some vanilla and bourbon in the pot with them.  This jam is absolutely fantastic on toast or scones, and I'm sure it could do double duty as a cake filling.

If you are going to preserve the jam, prepare the jars and lids: place six half-pint jars on a rack in a large pot. Add enough water to cover the jars, and bring to boil over high heat. Boil for 10 minutes, then turn off heat and allow the jars to rest in the hot water. Meanwhile, put bands and lids in a small saucepan and cover with water. Heat over medium heat until the water is simmering, then remove the pan from heat and allow the bands and lids to rest in hot water until ready to use.

Bring a large pot of water to a boil. Fill a large bowl with ice water. Cut a shallow X into the bottom of each peach and drop them into the boiling water. Blanch for 30 seconds, then immediately plunge the peaches into the ice water. Peel and chop the peaches, discarding the pits. Transfer them to a blender and pulse just until they are coarsely pureed. You should have about 4 cups of puree.

Transfer the peaches to a large, heavy-bottomed pot. Add the sugar, lemon juice, bourbon, cinnamon stick, and butter. Bring to a full rolling boil over medium-high heat, stirring constantly. Add the pectin and return the mixture to a full rolling boil. Boil hard for one minute. Remove to pot from the heat and skim any foam from the surface with a metal spoon. Stir in the vanilla bean paste.  Discard the cinnamon stick.

Ladle hot jam into hot sterilized jars, leaving ¼-inch headspace. Wipe rims of the jars, cover with lids, and screw bands on until just barely tight. Place jars on rack in pot and cover completely with water. Cover pot and bring to a boil over high heat. Boil for 10 minutes. Turn off heat, uncover pot, and allow jars to rest in water for five minutes. Remove jars from pot and allow them to rest undisturbed on counter-top for six hours or overnight. Preserved jam will keep for up to one year in a cool, dark place. Un-preserved jam will keep in the refrigerator for about six months.