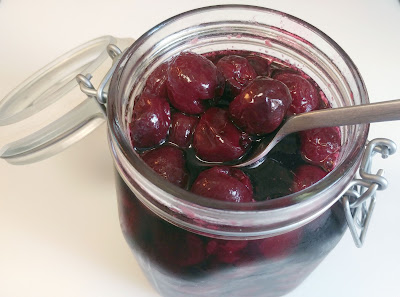 I remember as a child really enjoying Maraschino cherries.  Those bright red jewels in the jar never lasted long.  I wanted to put ten on one sundae.  A little ice cream with my cherries.  But as I got older, it slowly sank in that cherries really aren't that unnatural shade of red, so something unnatural had to be causing that.  And that kinda ruined those fabulous cherries for me.  UNTIL NOW.  I have found a ridiculously delicious recipe for making a bag of Bing cherries into something spectacular.  And now I have a ridiculous-big jar of goodies to dip into for months to come.

Set a mesh sieve over a medium bowl. Bring cherries, sugar, lemon juice, and ⅔ cup water to a simmer in a large saucepan over medium-low heat, stirring occasionally; cook until cherries have released their juices and are softened but still intact, 20 to 25 minutes. Pour cherries into prepared sieve, letting juices collect in bowl. Set cherries aside.


Return juices to same saucepan and bring to a simmer over medium heat. Cook until liquid is reduced to 1½ cups (it will be a thin syrup at this point), 15 to 20 minutes. Remove from heat, add reserved cherries, and stir in liqueur and almond extract.  Transfer maraschino cherries to jar, cover, and chill at least 24 hours before using.
Posted by Sara at 8:03 PM