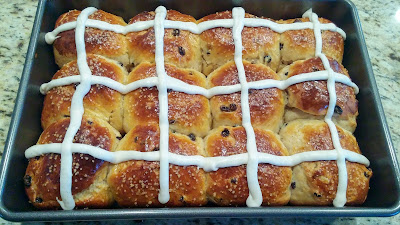 I've never made hot cross buns, but it's never too late to remedy that, right?  I even did my research.  Versions of this bun have been around since at least Queen Elizabeth I's time, and possibly dating back to before Christianity.  That's pretty impressive.  The ones they make in the UK and Australia normally have a cross of flour and oil piped on the top before it's baked, but here in the US, we like our buns with actual frosting on top.  It's like a delicious little raisin bread bun, and my nephew snapped his up and cried for more, so I guess these pass muster.  Definitely try them toasted and buttered the next day.

Make the dough:
Coat a large bowl with oil and set aside. Combine the half-and-half, yeast, and barley malt syrup in a small bowl and let stand until bubbly. Combine the flours, sugar, currants, candied peels, salt, and spices in the bowl of a standing mixer fitted with a dough hook (or in a large mixing bowl) and mix on low speed. Add the butter, eggs, vanilla bean paste, and the yeast mixture, and continue to mix until a sticky dough forms, about 3 minutes. Transfer the dough to a lightly floured surface and knead by hand until smooth, about 5 minutes. (If dough has been combined by hand, increase kneading time to 10 minutes.) Form the dough into a ball, place it in the prepared bowl, and turn to coat all sides with oil. Cover with a clean, damp kitchen towel and let rise in a warm, draft-free place until it doubles in volume -- about 1 hour.

Shape the buns:
Line a 9x13-inch baking pan with parchment paper and set aside. Punch the dough down, transfer to a lightly floured surface, and knead for 3 minutes. Divide the dough into 12 equal-sized pieces, about 4 ounces each. Shape each piece into a ball and place the balls about 1 inch apart in three rows of four on the prepared pan. Cover and let rise until the buns double in volume and touch one another, about 1¼ hours.

Bake the buns:
Preheat oven to 500°F. In a small bowl, combine the egg yolk with 1 tablespoon water. Using a pastry brush, lightly brush the mixture on the top of each bun. Place buns in the lower third of the oven and reduce oven temperature to 400°F. Bake until golden brown, about 20 minutes. Transfer to a wire rack.

Ice the buns:
In a small bowl, combine the confectioners' sugar, remaining milk, and vanilla. Stir until smooth. When buns have cooled slightly, drizzle a horizontal line across each row of buns followed by a vertical line to form a cross on the crown of each bun.