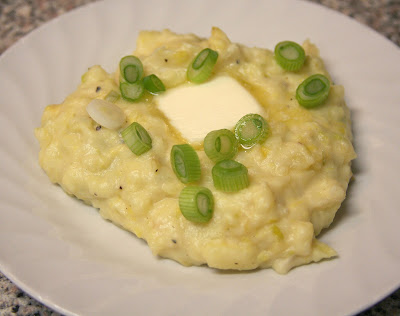 Normally I'm more excited about St. Patrick's Day, but for some reason I can't muster much energy for cooking lately.  I just want to eat out of to-go containers and skip the big mess in the kitchen.  But I've been eyeing this recipe for colcannon, and it's the perfect time of year to give it a whirl, so I really can't justify going for some more reheated Tex-Mex.  These potatoes are creamy and delicious, and it certainly doesn't hurt that there's a great leek-garlic thing going on in the background.

Note:  I found that dumping the potatoes into the milk/cream gives you ZERO leverage for adjusting the liquidity of the recipe, so I say that you should add the milk to the potatoes a little at a time, not the other way around.  Because once you add the milk, you can't un-add it.

Cover potatoes with water in a small pot; season with salt. Bring to a boil over medium-high heat, then reduce heat and simmer until a paring knife slides easily through the flesh, 30 to 40 minutes. Drain, let cool slightly, and peel.

Transfer colcannon to a large serving bowl. Top with remaining 2 tablespoons butter and sprinkle with scallion.