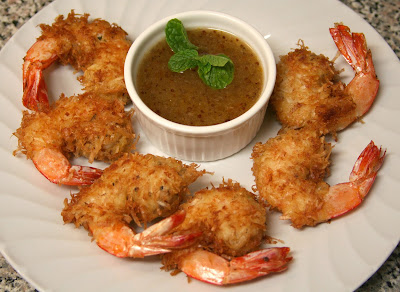 Okay, I admit it, I'm probably the only person I know who isn't watching the Super Bowl.  Is it just me, or does it seem like the Super Bowl is becoming a national holiday?  I don't seem to remember this level of obsession from when I was younger.  But hey, who can complain when it creates a fabulous opportunity to make delicious tailgating food, right?  And this year I decided to celebrate a game I'm not watching (hey, at least I know it's Broncos versus Panthers) with some delicious coconut shrimp.  Now, I used some shredded coconut that I shredded fresh and froze, and the shrimp aren't really sweet at all.  If you like your shrimp to have a sweet coating, go ahead and use that blue bag of sweetened shredded coconut instead.  Hey, it's a holiday, so calories are excused.

Note: I used Stella Artois for the beer and Crosse and Blackwell for the orange marmalade because that's what I had.

Dip the shrimp in beer batter and roll in coconut.  Fry in oil heated to 350°F in a deep-fat fryer, wok, or deep saucepan.  The oil should be at least 1½ inches deep.  Drop shrimp in a few at a time and fry until golden brown.  Remove and drain on paper towel.

To serve: Put a small bowl of the sweet and tangy sauce in the center of each plate.  Arrange 8 shrimp around it and serve immediately.

Thoroughly combine all ingredients in a blender, food processor, or mixing bowl, and pour the mixture into a large glass or plastic jar. Seal it so that it's airtight. It will keep indefinitely.