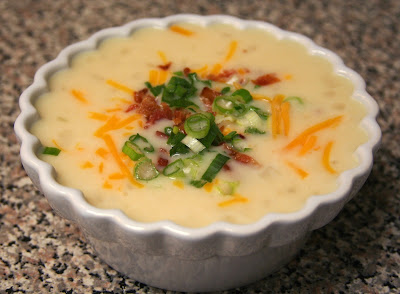 When I was younger, and Bennigan's was still around, I used to love getting their baked potato soup.  The stuff was amazing, especially when it was really cold outside.  Nothing screams comfort food like creamy, potatoey goodness.  The only problem is that Bennigan's declared bankruptcy in 2008 and shut down everywhere.  No more luscious potato soup for you!  Luckily, they had also put out a paperback recipe book that floated around the darker corners of eBay on occasion.  And this cookbook had a recipe for...Ultimate Baked Potato Soup.  Since the recipe was written for a large kitchen (margarine and flour in ounces, etc), I cleaned it up for a regular kitchen.  And it's just as good as I remember.

Place potatoes in a stock pot and fill with water. Place over medium-high heat and cook until potatoes are just done. Drain in colander and set aside.

In a large Dutch oven, melt ½ stick of the butter and add the onions; sauté until they become transparent. Add the remaining 1 stick of butter and melt.  Add the ham base and whisk until no lumps remain.  Sprinkle with the flour.  Let cook for 2 to 3 minutes, whisking constantly, to remove the floury taste.  Add the chicken stock slowly, whisking constantly, so that no lumps form.  Add the milk, cubed cooked potatoes, and black pepper, and stir until completely mixed. Continue to stir until the soup is hot and has thickened slightly.  Garnish the top of each bowl with Cheddar cheese, bacon, and green onions and serve.