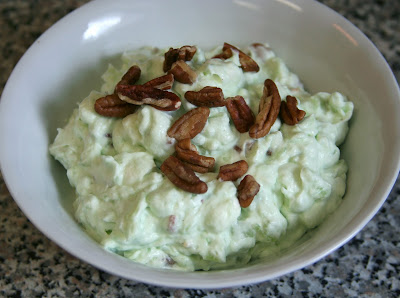 There is an odd proliferation of this salad on the internet.  Especially for a 70's relic.  Not sure why that would be.  As Americans, do we have an affinity for strange green fluff?  I'm also still trying to figure out why you would put pecans in a PISTACHIO salad, but I have a feeling that mystery will remain one.  And just to note, this is as much a "salad" as a bowl of ice cream.  But oddly, I kinda like it.  I can see the charms of a quivering green mass on a hot day.  Especially if I was 10 years old.  Or 30-something going on 10.

Mix together the pineapple, including the juice, and pudding mix until it starts to thicken.  Add in the pecans and marshmallows and stir well.  Fold in the whipped cream.  Refrigerate until ready to serve.