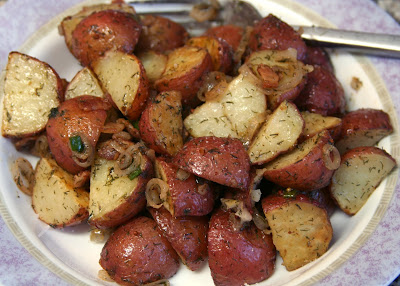 I can't believe I was able to find ramps in the local grocery.  I honestly never thought I would see them again.  True, they were just the bulb end, with none of the glorious greenness at the top, but I'll take it.  And I cooked them up with some bacon, because, well, bacon.  And then I tossed them in a dill potato salad.  And all was right with the world.

Toss the potatoes with the olive oil and spread out on the prepared baking sheet. Sprinkle with salt and pepper. Roast potatoes for 20-25 minutes, flipping halfway through, until tender when pricked with a fork, but not mushy.

While potatoes are cooking, warm a small skillet over medium-high heat. Add the bacon and cook until the fat is rendered and the bacon is crisp. Add the ramps. Cook for about 5 more minutes, or until the ramps are tender. Combine the vinegar, honey, and mustard, and pour the mixture over the ramps and bacon. Cook for about a minute, then remove from the heat.

Dump the potatoes into a large bowl and pour the vinegar mixture over them. Sprinkle with the dill and green onions. Mix well. Season with additional salt and pepper. Allow the mixture to sit for a few minutes to allow the potatoes to absorb some of the sauce. Serve warm.

Note:  If you are able to get the ramps with the greens attached, slice them and add them at the same time as the bulbs.  You can then omit the green onions.
Posted by Sara at 7:18 PM