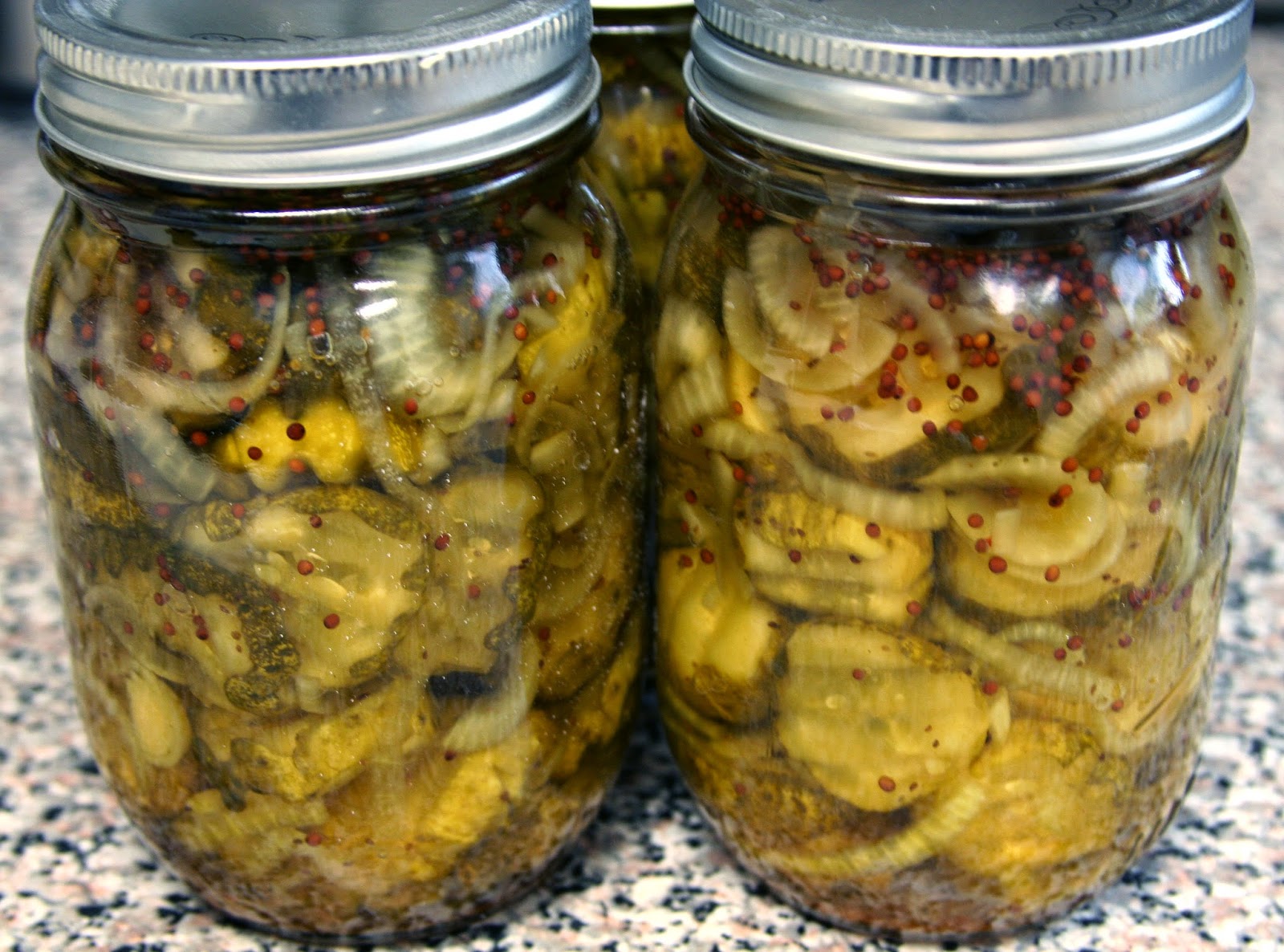 There was a barbecue restaurant out in East Texas near where my parents had a lakehouse.  The barbecue was good, but the best part was the homemade bread and butter pickles they put out on the condiment tray.  Those things were amazing: sweet and tart and crunchy.  I've always wondered how to make them, but I never really bothered to search out a recipe until I ran across some little pickling cucumbers at the farmer's market.  I bought a whole bag on a whim, and then realized that I should probably DO something with them.

While canning seems to eat up whole days, in this case I think it's worth it.  I got five jars of luscious pickles, and they'll keep for probably a year (if I don't eat them all first).  They go with pretty much everything.  I'm starting to sound like a real Southerner, putting out my pickles and chow-chow with each meal.

Carefully rinse the cucumbers, scrubbing away any dirt that may have stuck to the ribs. Slice off 1/8-inch from the ends and discard. Slice the cucumbers in ¼-inch thick slices, place in a large bowl. Add the sliced onions and pickling salt. Stir in so that the salt is well distributed among the cucumber slices.  Cover with a clean tea towel (thin towel, not terry cloth). Cover with a couple of inches of ice. Put in the refrigerator and let chill for 4 hours. Discard ice. Rinse the cucumber and onion slices thoroughly, drain.  Rinse and drain again.

If you are planning to store your pickles outside of the refrigerator for any length of time, you will need to sterilize your jars before canning, and heat the filled jars in a hot water bath after canning. To sterilize the jars for canning, place empty jars on a metal rack in a large 16-quart canning pot. (Jars must rest on a rack in the pot, not on the bottom of the pot). Fill with warm water and bring to a boil. Reduce heat to warm to keep the jars hot and ready for canning. Remove with tongs or jar lifters one by one as you can the cucumbers. Sterilize the lids by bringing a pot of water to a boil and pouring water over a bowl containing the lids.

In a 4- or 6-quart pot, place the vinegars, sugar, and all of the spices. Bring to a boil. Start packing the hot jars with the cucumbers and onions. First pack a jar to an inch from the rim with the vegetables. Then pour hot vinegar sugar syrup over the vegetables to a ½-inch from the rim. Wipe the rim clean with a paper towel. Place a sterilized lid on the jar. Secure with a metal screw band.

If you are planning to store pickles outside of refrigerator, process the filled jars in a hot water bath for at least 15 minutes. Return filled jars to the same canning pot with its already hot water. Water level needs to be at least one inch above the top of the cans. Bring to a boil and let boil hard for 15 minutes, or 20 minutes for altitudes of 1,001 to 6,000 feet. Over 6,000 feet, boil for 25 minutes. Remove jars from pot. Let cool down to room temperature. Jars should make a popping sound as their lids seal. If a lid doesn't properly seal, do not store the jar outside of the refrigerator.
Posted by Sara at 4:06 PM