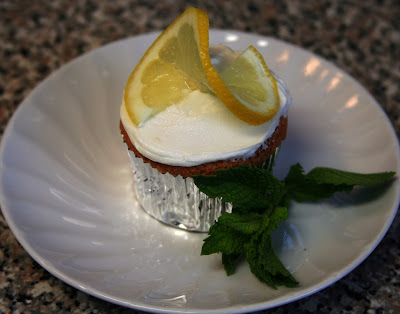 I've always kinda thought that angel food cake tasted like...nothing.  Admit it, I'm right.  So I was never a huge fan.  But what I've discovered is that it just needs a little help.  It needs some lemon to perk it up.  And in cupcake size, it's just the right serving.  Icing never hurts either.

Beat egg whites and salt with a mixer at high speed until frothy (about 1 minute). Add cream of tartar, and beat until soft peaks form. Add ½ cup granulated sugar, 1 tablespoon at a time, beating until stiff peaks form. Sprinkle flour mixture over egg white mixture, ¼ cup at a time; fold in after each addition. Stir in vanilla and rind.

Divide batter evenly among prepared muffin cups. Bake at 350° for 18 minutes or until lightly browned. Remove from pan; let cool completely on a wire rack.