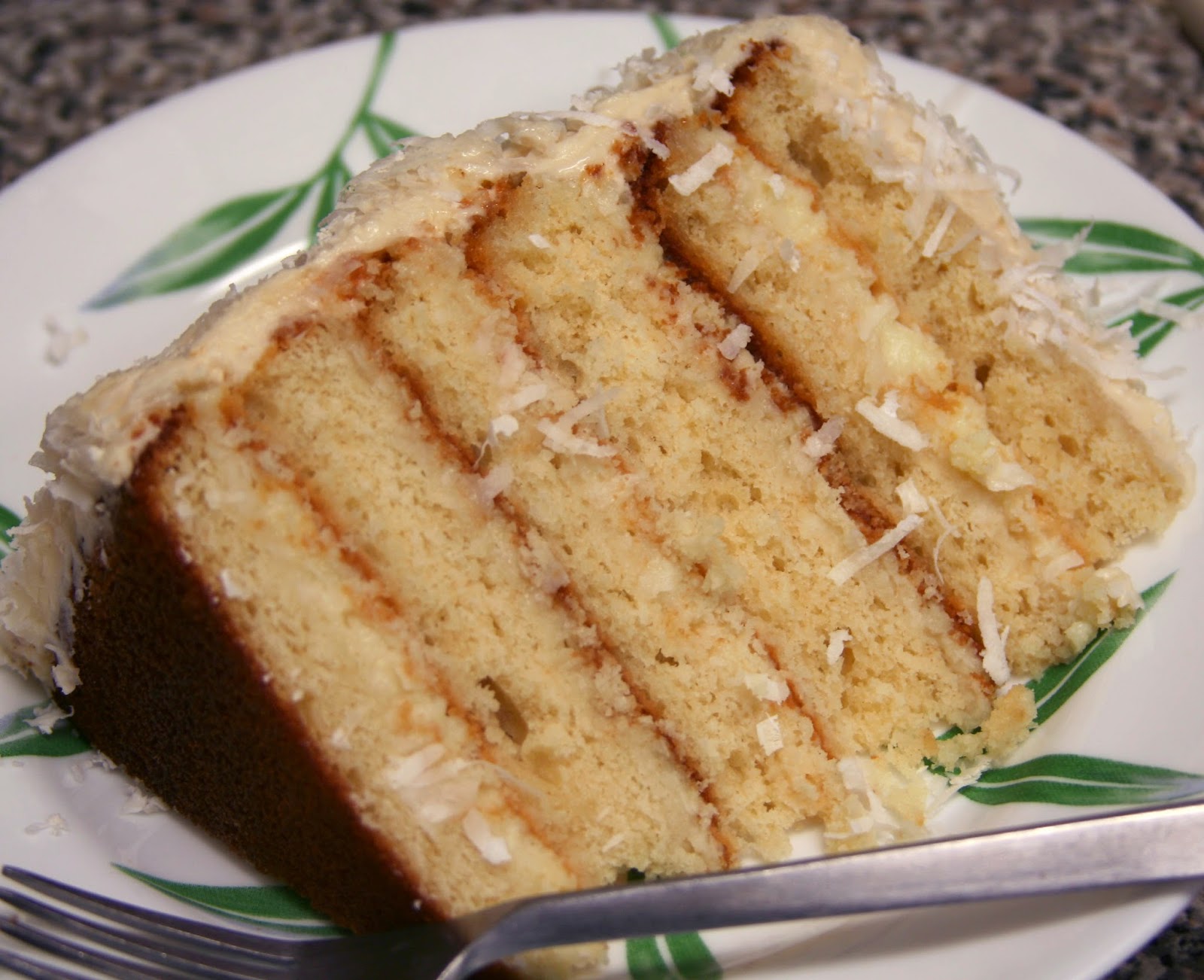 I'm always looking for a bigger, better coconut cake.  My mom's recipe is pretty darn good, and the filling cannot be topped.  But I hate baking with Crisco.  I want a butter cake, not a shortening cake.  And I want a buttery icing, not an egg white icing.  After searching and searching, I finally found this beauty by food writer Jeffrey Steingarten.  It's adapted from a cake in one of Paul Prudhomme's cookbooks.  So you know it's amazing and authentic.

I kept to the recipe in almost every way except for the filling.  I needed my Grand Marnier pudding filling.  It's my favorite part of the cake.  Or used to be.  Now it sits serenely in between buttery layers of sweet coconut goodness that doesn't shame it at all.  Oh, and I actually cracked a coconut for this.  I'm sure my downstairs neighbor thought I was murdering someone, but I was so worth it.

Preheat the oven to 350°F. Using room-temperature butter, grease and flour three 8x2-inch round cake pans. To be extra safe, you may also line the inside bottom of each cake pan with circles of parchment paper. Note: The custard filling needs to be made several hours to a day in advance to be chilled.

In a medium-size bowl, sift together the flour, baking powder, and salt. Set aside. Pour the heavy cream into two- to three-quart metal or glass bowl and put it into the freezer along with a medium-large whisk. Let them chill between 30 and 45 minutes. In a large bowl of a stand mixer, combine the sugar and eggs; beat on low speed until smooth, about one minute, pushing sides down with a rubber spatula. Add the butter; beat on low until mixture is creamy and light colored, about three minutes. Beat in the milk and vanilla. Gradually add the flour mixture, about 1 cup at a time, beating after each addition just until smooth and pushing sides down as needed. Then beat on high speed for about one minute more, pushing sides down. Remove the bowl of cream and the whisk from the freezer, and whisk, by hand, until the cream has gone just past the soft-peak stage. Carefully fold the whipped cream into the cake batter, using a rubber spatula. Divide the batter evenly between the three cake pans and bake in the middle rack of the oven, until the centers spring back when lightly pressed (and the layers just begin to pull away from the pans), about 18 to 20 minutes. Meanwhile, make the glaze, following the recipe below. Then make the frosting and remove the custard filling from the refrigerator. Stir 1 cup shredded coconut into the chilled custard filling.

Remove the cake pans from the oven and let cool for about 10 minutes. Then, using a knife, loosen the outsides of the cakes from the pans. Invert the pans onto wire racks and eject the layers from the pans by gently pounding and shaking the pans. Once the layers have cooled for another 15 minutes, use a long, sharp knife to slice each layer in half horizontally. Brush the glaze over the top surface and sides of one layer, a little at a time and using one-sixth of the glaze (about 2½ tablespoons) for each layer. Make holes in the cake so the glaze can sink in. (A dozen holes in each layer should do it; you can use either a small knife or a roasting fork, which you’ll twist a little after you insert it.) Immediately (before glazing another layer) spread one-fifth of the filling on top of the glazed layer, extending it to about ½ inch from the edge. Then place another layer on top and repeat procedure of glazing and spreading on filling until all the layers are glazed and all but the top layer have filling spread on them. Let the cake cool thoroughly, then frost the top and sides. Sprinkle the remaining 2 cups of shredded coconut all over the cake. Let sit at room temperature for between four hours and two days (so that the cake absorbs the sweet, moist coconut flavors) before slicing.

Combine the coconut milk and the sugar in a two-quart saucepan and bring to a boil over high heat, stirring occasionally. Continue boiling until glaze reduces to one cup, about five minutes, stirring frequently. Remove from heat and stir in the vanilla. Pour into a glass measuring cup.

Combine the cream cheese, butter, vanilla, and salt in the bowl of a stand mixer. Beat on high speed until creamy, about one minute. Turn speed to medium and beat in milk and 1 cup of the sugar, pushing sides down with a rubber spatula. Beat in the remaining 3 cups of sugar, 1 cup at a time, mixing until smooth before adding more. If the frosting becomes too thick for the mixer, do the last bit of mixing with a spoon.

In a heavy 2-quart saucepan, with a wire whisk, mix well all of the ingredients until well blended. Over medium heat, cook, stirring constantly, until the mixture thickens, about 10 minutes. Cover the custard’s surface with waxed paper; refrigerate until well chilled, about 1½ hours.
Posted by Sara at 1:16 PM