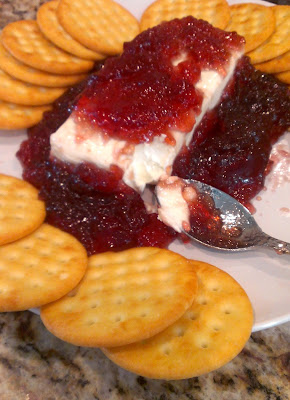 I first had jalapeno pepper jelly with cream cheese and crackers at a friend's dinner party.  I think I'm a little behind on this aspect of Southern cooking, because I didn't really know what it was until I put a delicious bite in my mouth.  The jelly had come from a small manufacturer who only sells her jellies in a small shop in downtown McKinney (that I know of), and the recipe is a closely guarded secret.  I hate when people keep recipes secret, so of course I had to make my own.

Okay, so I didn't really make jelly with fresh blackberries at the end of November.  I'm trying to be good about seasonality, so this lovely jelly was manufactured this past summer, at the height of berry season.  It's just been sitting pretty in jars, waiting for entertaining events to be rolled out to great acclaim.  You can certainly adjust the amount of jalapeños in the recipe, but as is, the jelly has a nice burn under the sweetness.

Using a spatula, press the blackberries through a fine mesh screen into a large bowl. The screen should catch the seeds, which should be discarded. Add as much blackberry flesh as possible without introducing any seeds into the liquid. Set aside.

Put the green peppers and jalapeños into a food processor fitted with the steel knife blade. Pulse the pepper mixture until the pieces are about ¼-inch on each side. Pour the pepper mixture into a large pot or Dutch oven. Add the apple cider vinegar and the sugar, stirring to combine. Heat the mixture over medium high heat until the sugar melts and the mixture comes to a boil. Reduce the heat to medium and boil for 10 minutes, stirring occasionally to ensure the mixture does not boil over.

Remove the pepper mixture from the heat and strain into the bowl with the blackberry juice. Discard the pepper pieces. Stir the blackberry mixture to combine and then return the mixture to the large pot or Dutch oven. Bring the mixture back to a boil. Add the liquid pectin and boil hard for one minute. Remove the mixture from the heat and ladle into the prepared jars. Screw on the lids and process in boiling water for 10 minutes. Let cool for 24 hours. The jelly may take up to a week to set.