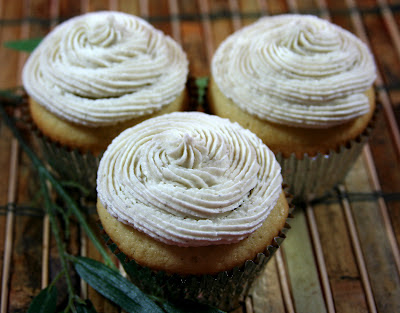 I've always been a chocolate girl.  If I'm in a restaurant or a bakery or pretty much anywhere ordering something sweet, 90% of the time it's going to be chocolate.  Heck, I even order my coffee from Starbucks with chocolate in it.  I'm very dedicated as you can see.

So, I'm sure you're wondering why I made a vanilla cupcake.  Good question.  I don't think I've ever had a good vanilla or yellow cupcake.  They always seem to be a tasteless sponge covered in frosting.  The cupcake becomes just a vehicle to get the frosting to your mouth.  Which I guess is fine, but why can't the cupcake taste good, too?  So, I pretty much set my money on chocolate every time.

These cupcakes are totally different.  They not only have the seeds of an entire vanilla bean in the cake, but also a whole tablespoon of high quality vanilla extract.  Yes, they actually have flavor.  Good flavor.  And there's something about the butter/oil/sour cream mixture that makes the crumb incredibly tender and moist.  Gosh, I'm drooling just thinking about them.

The frosting on the top has another vanilla bean and another teaspoon of vanilla extract, so you basically are just slapping fabulous vanilla taste on top of more vanilla taste.  Which makes a pretty amazing cupcake, considering how...plain it looks.  Chocolate may actually have a run for its money.  I suggest you make some NOW.

In a small bowl, combine sugar and seeds from the vanilla bean.  Using the back of a spoon, move around the bowl and apply pressure to break up any clumps of seeds and to better infuse the vanilla flavor into the sugar. Set aside.

In a medium-sized mixing bowl or bowl of a stand mixer, mix together the cake flour, baking powder, baking soda, and salt.  Add the vanilla bean sugar and mix until well combined.  Add the butter and mix on medium-low speed for three minutes.  You'll end up with a very fine crumb texture.

Fill cupcake liners just over ½ full.  Bake for 14 minutes and then test to see if they are done. They are done when a toothpick comes out without wet batter stuck to it.  The cupcakes should appear white with specks of vanilla bean. They should not turn a golden brown.  If they are not done, test again in two minutes.  If they are still not done, test again in another two minutes.
When the cupcakes are done, remove them immediately from the tins and leave them on a cooling rack to cool.  Frost with Vanilla Bean Buttercream Frosting.

Mix together the sugar and butter until they are blended and creamy.  Add the vanilla extract or vanilla bean seeds and milk and continue to beat for another minute.  If desired, add more vanilla extract to taste, or more powdered sugar to make the frosting stiffer.
Posted by Sara at 7:36 PM