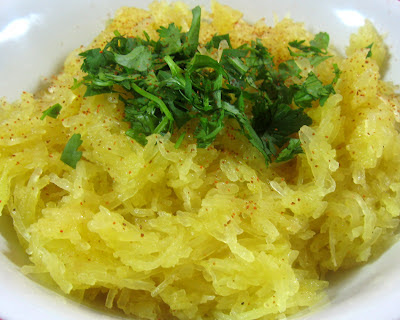 I'm trying to be healthier about what I eat.  After so many years of just indulging where I wanted and when I wanted, I'm having to pay the price with restrictions and exercise.  But that doesn't mean that everything I eat has to taste like used-up cardboard.  It's still possible to have something delicious that doesn't have 1,000 calories and make your arteries scream for mercy.

I'm not sure where the idea for cooking a spaghetti squash came from.  I remember my mom getting some dish at Pappadeaux that had spaghetti squash as a side, and it always seemed tasty to me.  I figured it couldn't have too many calories in it, and it probably has a whole lot more nutrition than a french fry.  So, I searched the internet for something that sounded promising (and hopefully didn't involve spaghetti sauce), and what I came up with is a recipe from Gourmet magazine.  I actually saw it first on Smitten Kitchen, but I went back to the original source to double check for alterations.

The squash was really easy to cook in the microwave, even if at one point it sounded like it had exploded despite my preventative knife pricks.  I only used a 2 pound squash, and it took about 12 minutes on high in my microwave.  Then I mixed up the butter sauce and dumped everything together in a bowl.  Dinner doesn't get any easier than that.

The spice level is good, I think, unless you're a bit jaded by too much fast food.  If so, you might need to fiddle with the amount of cumin and ground coriander.  I think the cayenne adds some needed heat, and the cilantro adds freshness.  And you just feel so....healthy eating it, even though it's smeared in butter.  Only 180 calories per serving, assuming you get about 7 cups of squash from the cooked (4-pound) shell.

Pierce squash (about an inch deep) all over with a small sharp knife to prevent bursting. Cook in an 800-watt microwave oven on high power (100 percent) for 6 to 7 minutes. Turn squash over and microwave until squash feels slightly soft when pressed, 8 to 10 minutes more. Cool squash for 5 minutes.

Meanwhile, melt butter in a small heavy saucepan over moderately high heat. Add garlic and cook, stirring, until golden, about 1 minute. Stir in spices and salt and remove from heat.

Carefully halve squash lengthwise (it will give off steam) and remove and discard seeds. Working over a bowl, scrape squash flesh with a fork, loosening and separating strands as you remove it from skin. Toss with spiced butter and cilantro.