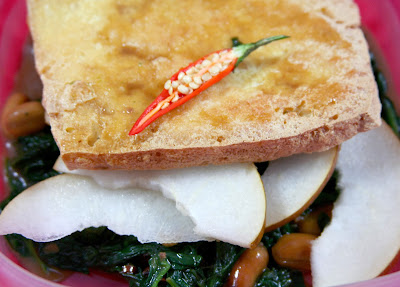 So, after the trauma of the blueberry scones, I decided to give Tyler Florence another chance. And since I'm trying to be relatively healthy, I decided to try something with tofu. Most people don't cook with tofu. It's just too weird. And spongy. And foreign. But it's also really good for you, so suck it up!

Tyler's got a recipe for some fried tofu with spinach and Asian pear which sounded pretty good and healthy. The picture looked awesome, but after the scone debacle, I decided to be a little more skeptical about the ingredient list.  Central Market, as usual, provided the tofu, organic spinach, and Asian pear. The recipe calls for two pounds of spinach for two people, which is just this side of ridiculous, so I did one pound. Plus it was cheaper that way.

Didn't really like this one. It was...different. No, it was just weird. I mean, there was nothing specifically wrong with it. Everything was good on its own. It just didn't work as a combination, especially the pear with the peanuts with the spinach. I'm actually pretty disappointed in Tyler at this point, so I think I'm going to ditch his book. Sorry, Tyler!

Lay several layers of paper towels on a cutting board, then place the tofu squares on top, side by side. Cover the tofu with more paper towels and put a plate on top. Add a can or two to press down and drain out some of the water. This makes the tofu denser and meatier.

In a large skillet, heat the peanut and sesame oils just to the smoking point. Fry the tofu on both sides, flipping occasionally, until golden, about 8 minutes. Remove the tofu from the pan and drain on paper towels.

Using the same pan, saute the ginger, garlic, chile, star anise, and peanuts. In a small bowl, mix the hoisin sauce, soy sauce and lime juice together. Briefly toss the spinach in the pan, stirring just to wilt, no more than 30 seconds. Remove the spinach to a bowl, scraping the peanut mixture in there also. Put the pan back on the heat, and heat the hoisin mixture. Combine the sauce with the spinach and divide between two bowls. Lay pear slices and tofu on top.
Posted by Sara at 11:19 PM