This cooking project has certainly been a learning experience, in more ways than one. I've eaten some things that I never thought I would try. I've made some things I never thought I would make. And I'm actually kinda enjoying the scavenger hunt aspect of finding the ingredients for the Spanish recipes that are part of The Family Meal. I don't think Chef Adria realizes how difficult some of these things are to find. As in, nearly impossible. It's like a challenge. And my OCD will not let me fail. I will not fail!!

Chef Adria calls for peppers for his sandwich, but he never says what kind of peppers. That leaves quite a lot to the imagination. In looking at how the peppers are prepared, it seemed like a Padron pepper would be about right, as these are cooked just like in the traditional tapas dish. But where do you find a Padron pepper in Dallas in February? So I looked for shishito peppers, a good substitute, which I had seen in Fiesta two weeks ago. Guess what? Not one single store in the entire metroplex had shishito peppers. They had all run out just before I called. I honestly thought this menu was never going to get made. Then I was walking through Whole Foods one afternoon, and what do I see? A box of Padron peppers. I almost knocked this poor man to the floor in my rush to grab them. For the almond soup, I was never able to find nougat ice cream. Apparently nougat is an almond confection very popular in Europe. Not so popular here. Chef Adria said I could substitute a nut ice cream, so I got some super expensive toasted almond gelato to make up for my nougat failure. Okay, I got it because it looked delicious. 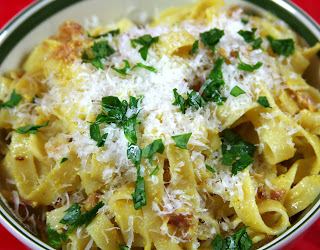 I have nothing bad to say about noodles smothered in egg yolks, bacon, cheese, and cream. Nothing. Anyone who thinks this sounds gross is ignoring the cries of their fat cells. This is really rich and really filling. And smoky. And creamy. And you could probably just have this for dinner. 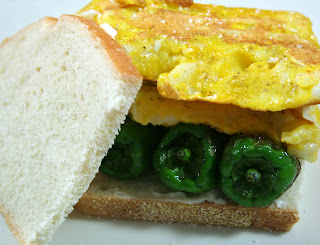 Okay, the sandwich was not good. This is the first time I have actively not liked something out of this cookbook. The fish was blah. The sandwich was blah. I pulled my sacred peppers out and ate them separately. The peppers were fabulous. The fish desperately needed some help. And I even sacrificed one of my beautiful organic, free range, super petted happy chicken eggs for the coating, hence the very yellow tinge. This one is definitely a no. Unless I figure out a way to doctor up the fish. And no, I did not toast my bread. I pretty much hate toast. Don't know why. Maybe it would have helped to toast the bread, but I doubt it. 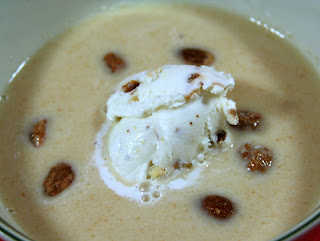 The almond soup was amazing. It was kind of a pain to drain all that almond milk through a sieve, but once it's in the bowl....dang. Creamy and light, and then a dollop of creamy and sinful gelato in the middle. I've never had dessert soup, but this may change my mind about alternative dessert possibilities.