When I lived in South Korea for a couple of months, the school I was teaching English at would offer us lunch. This was the same stuff that the kids were eating, and it normally involved rice, kimchi, and whatever the main dish of the day was. Every couple of weeks, this spicy squid dish would come up in the rotation. Being relatively adventurous, I tried it. It was actually pretty good. Until the next day when my stomach felt like it was imploding. I chalked it up to coincidence. The next time the squid was served, I tried it again. Same reaction the next day. So, I basically discovered that squid and I do not get along. But here's the weird thing...it's only the tentacles. As long as I stick to the rings, I'm fine. Needless to say, when I saw this dish come up in the meal rotation, I was a little wary. Plus, the rice is black. That's enough to make any reasonable American take a step back.

Squid ink is apparently completely unknown here in Dallas. I even called Italian groceries, and they kept repeating the name like they were trying to figure out to what I was referring. Squid ink....hmmm....squid ink, huh? YES. SQUID INK. No dice. Luckily Amazon had a vendor that got me some within the week. The squid came from the seafood case at Central Market. For the chocolate bread, I cheated a little bit. The recipe calls for a rustic white bread, but they had the cutest little brioche loaf at Central Market. Hey, it's white bread, right? Plus, I used the leftovers for French toast. 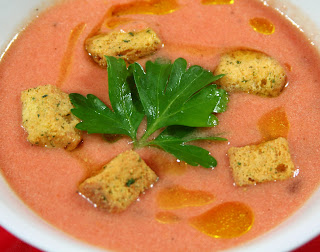 The gazpacho was refreshing, but incredibly oniony. Is that a word? Overpoweringly oniony. See, Chef Adria does not specify exactly what he means by "small onion", so I had to cut a quarter out of one of my onions and hope it worked. I can tell you now that "small onion" means shallot size. In fact, just add a little bit at a time. I think this soup would be a great summertime dish, but since it's still pretty much winter, I wasn't enthused. 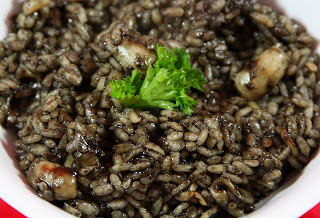 The black rice with squid turned out surprisingly tasty. Kinda salty, like ocean water. I was afraid the squid would turn out rubbery since the cooking time was more than a brief grill, but it was pretty tender. It was a little strange getting past the black color, but I think I would try this again, although probably in a restaurant. 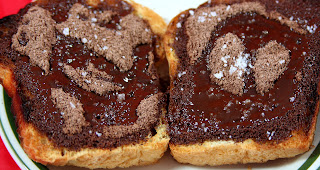 The chocolate bread was also a bit of a surprise. The toasting made the bread a little crunchy, and the chocolate shavings melted down onto the toast as I sprinkled it on. The olive oil added a fruity undertone, and the salt really enhanced all of the other flavors. For something so simple, it was pretty darn good. Those Spaniards sure know their food.