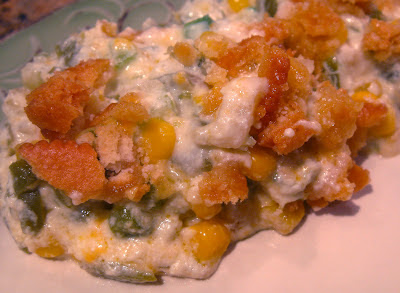 I'm not sure if I've mentioned it, but I review cookbooks for a website called ChefTalk.  Every couple of months they send out a list of available cookbooks, and I get to fight it out with my fellow reviewers to get the most interesting cookbooks.  I always try to get something interesting (and avoid things like a Crohn's and colitis cookbook, which I'm sure isn't a bad cookbook, just not up my alley).  I was super excited that I got my first pick, for Southern Plate (which is based on a blog), which I thought would be similar to a Paula Deen cookbook.  I made some recipes out of the book, which is very nicely photographed, but unfortunately, it just felt like a let-down to me.

I really hate it when cooks write cookbooks that basically amount to throwing a bunch of canned or frozen food together.  It's a shame really, especially with today's grocery stores being so well stocked.  I just don't understand it.  This casserole probably would have been fantastic with fresh haricot verts and corn straight off the cob, but the way it's written, I just can't get past the metallic flavor of the green beans and freezing destroys the integrity of corn.  Disappointment.  The sour cream adds a nice tartness to the sauce, but I'm also not thrilled with using condensed soup.  This might be good for a harried mom trying to throw dinner together after work while the kids are tearing the house down, but it just didn't do it for me.  At least the buttery Ritz crackers on top were delicious.

In a large bowl, mix all the ingredients together except for the crackers and butter.  Place in a casserole dish.  Melt the butter in a skillet and mix with the crushed Ritz crackers.  Spread over the top of the vegetables and bake for 45 minutes, or until bubbly.