Cooking for the Weekend: Rum-Spiced Cider 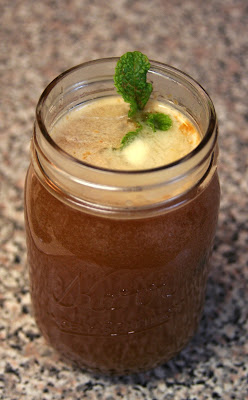 Finally getting sick of all those pumpkin spice lattes and peppermint hot chocolates?  I know you are, don't lie.  As fantastic as they are, and as much as I obsess about them when they first show up each year, eventually they've run their course.  So what do you do when you've run out of warm things to drink?  Heat up some cider, throw a pat of butter on top, and settle back for some full-body heating action.  This drink will put a serious dent in a cold night.  Promise.

In a non-reactive pan, combine the cider, brown sugar, short cinnamon sticks, cloves, and allspice. Set over medium-low heat, partially cover, and slowly bring just to a boil, stirring occasionally and skimming any scum that forms on the surface.

Meanwhile, divide the rum among 8 large mugs. Drop a pat of butter and a cinnamon stick into each mug, if desired. Strain the hot cider into the mugs and serve immediately.