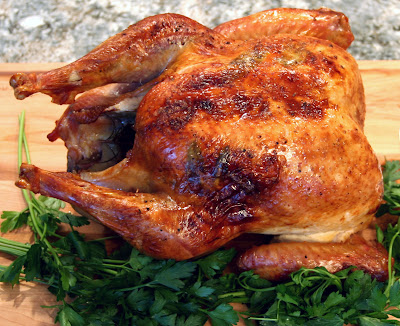 I have felt like a failure for years now.  I have never been able to make a Thanksgiving turkey that is: 1) juicy, 2) cooked properly all over, and 3) tasty and brown.  I was beginning to think you couldn't have all of those things at once.  I glared at the turkey beauty shots in the cooking magazines, convinced that they had been rubbed with brown shoe polish or something.  I was a good cook, so why did my turkeys never turn out?

Well, Alton Brown saved me.  I used his recipe for roast turkey from his Good Eats television show.  It requires that you make a brine and soak the turkey the night before you plan on roasting it.  Then, Thanksgiving Day, you put that bad boy in the oven with all sorts of things shoved up in the body cavity (apple?  cinnamon stick?).  You stick a probe thermometer in the breast, walk away, and enjoy some time with your family.  And what you get is a fabulous, moist, tasty, perfectly browned turkey.  Success!!!

2 to 3 days before roasting:

Begin thawing the turkey in the refrigerator or in a cooler kept at 38°F.

Combine the vegetable stock, salt, brown sugar, peppercorns, allspice berries, and candied ginger in a large stockpot over medium-high heat. Stir occasionally to dissolve solids and bring to a boil. Then remove the brine from the heat, cool to room temperature, and refrigerate.

Early on the day or the night before you'd like to eat:

Combine the brine, water and ice in the 5-gallon bucket. Place the thawed turkey (with innards removed) breast side down in brine. If necessary, weigh down the bird to ensure it is fully immersed, cover, and refrigerate or set in cool area for 8 to 16 hours, turning the bird once half way through brining.

Preheat the oven to 500°F. Remove the bird from brine and rinse inside and out with cold water. Discard the brine.

Place the bird on roasting rack inside a half sheet pan and pat dry with paper towels.

Combine the apple, onion, cinnamon stick, and 1 cup of water in a microwave safe dish and microwave on high for 5 minutes. Add steeped aromatics to the turkey's cavity along with the rosemary and sage. Tuck the wings underneath the bird and coat the skin liberally with canola oil.

Roast the turkey on lowest level of the oven at 500°F for 30 minutes. Insert a probe thermometer into thickest part of the breast and reduce the oven temperature to 350°F. Set the thermometer alarm (if available) to 161°F. A 14- to 16-pound bird should require a total of 2 to 2½ hours of roasting. Let the turkey rest, loosely covered with foil or a large mixing bowl for 15 minutes before carving.
Posted by Sara at 7:13 PM