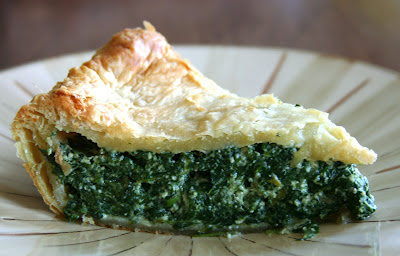 I was testing some recipes from Recipes from an Italian Summer for a review I was writing, and I just about died when I saw a recipe for spinach pie.  Can you tell I like spinach?  I took advantage of the summer's bounty and bought a bag full of fresh greens, which I then cooked down, mixed with cheese, and baked in a puff pastry shell.

While the rule of summer is generally no ovens, I think this pie is definitely worth heating your kitchen up over.  It can be eaten hot or cold, so you can even drag it around on picnics or family reunions.  The only thing I didn't like is that the garlic flavor tends to get really lost.  I also didn't salt it enough before baking, so the salt had to be added at the table.  I also kept wishing it had...more.  Like sautéed mushrooms or something.

Wash the spinach and put it into a pan over low heat with just the water clinging to its leaves. Cook for five minutes, stirring occasionally. Drain the spinach well, pressing out as much liquid as possible. Melt the butter in a skillet, add the garlic clove and cook, stirring frequently, for a few minutes, until golden brown, and then remove and discard the garlic. Add the spinach to the skillet, and cook, stirring occasionally, for five minutes, then remove the skillet from the heat and let cool slightly.

Preheat the oven to 350°F and grease a pie plate with butter. Finely chop the spinach, put it into a bowl, and stir in the ricotta, eggs, and cream. Season with salt and pepper.

Roll out ⅔ of the pastry dough on a lightly floured counter and use it to line the prepared pie plate. Spoon the spinach mixture into the pastry shell. Roll out the remaining dough. Brush the rim of the pastry shell with egg yolk, place the dough on top, and press the edges together to seal. Brush the pie with egg yolk and prick the lid all over with a fork. Put the pie plate on a baking sheet and bake for about 40 minutes, until the pastry is risen and golden brown. Serve warm or cold.


Thank you for posting this recipe. I am looking forward to trying it, with the added salt, mushrooms and garlic!