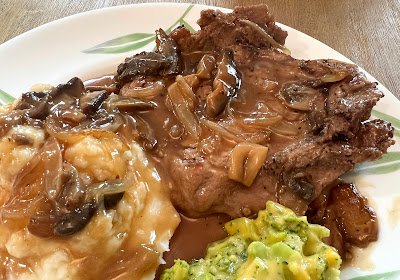 I pulled some pork chops out of the freezer and knew that I wanted to do something with the jar of pork gravy that had been staring at me for months, but I didn't know what the answer was.  At least until I looked at the side of the jar.  Chops cooked in mushroom gravy?  Sign me up.  It's a super easy dinner, definitely good for a work night, and makes something very satisfying with minimal effort.
Country-Style Pork Chops
From Heinz