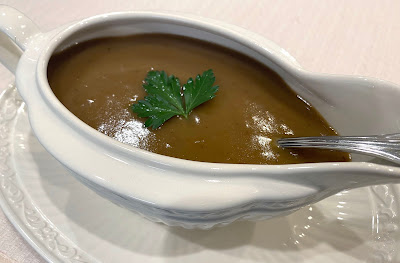 I have never been a good gravy maker.  I can make pretty much anything else on the planet.  But not gravy.  Mine generally comes from a jar or not at all.  So I was a little bit hesitant to try, yet again, to make my own gravy, believing I would only end up being disappointed.  Luckily I was way off base.  This gravy, while a bit of work, is pretty darn delicious.  And don't let that MSG scare you off...it gives it that extra special something.  I finally don't feel like a gravy failure.
Update 11/2020: On remaking the gravy this year, I backed off a bit on the sherry vinegar.  When I originally made this gravy, I found that the vinegar was very pronounced, and I wanted the meaty flavor of the gravy to shine.  Using just 1 teaspoon seemed to work just fine.

Preheat oven to 450°F. Toss wings and necks in a large cast-iron skillet with 2 tablespoons oil until coated. Roast, tossing halfway through, until golden brown and starting to crisp, 25 to 35 minutes.

Remove wings and necks from oven and add garlic, shallots, ginger, mushrooms, peppercorns, and remaining 2 tablespoons oil to pan; toss to coat. Return to oven and roast, tossing halfway through, until wings are deeply browned and crisp and vegetables are browned, 30 to 40 minutes more.

Meanwhile, mash together flour and butter in a small bowl with your fingers or a fork until homogenous. Set beurre manié aside.

Remove skillet from oven and set on stovetop over medium-high heat. Add sherry and cook, stirring and scraping up any browned bits with a wooden spoon, until sherry is almost completely reduced, about 2 minutes.

Scrape wings, necks, and aromatics into a medium pot and add parsley and stock. Bring to a low simmer over medium-high heat. Reduce heat and simmer gently, skimming fat from surface occasionally and turning wings so both sides get a chance to be submerged, until liquid is flavorful, mahogany in color, and reduced by about one-third, 30 to 40 minutes.

Fish out wings and necks; discard. Pour mixture through a fine-mesh sieve into a large measuring glass; discard solids. Rinse out pot and pour turkey mixture back in. Bring to a simmer over medium. Whisking constantly, add reserved beurre manié and whisk until completely incorporated. Simmer, whisking often and skimming any foam from surface, until gravy is thick enough to coat a spoon, 6 to 8 minutes. Remove from heat and whisk in vinegar and MSG. Taste gravy and season with salt and pepper if desired.

Do Ahead: Gravy (without vinegar and MSG) can be made 5 days ahead. Let cool, then cover and chill. Reheat over medium until simmering, then add vinegar and MSG.