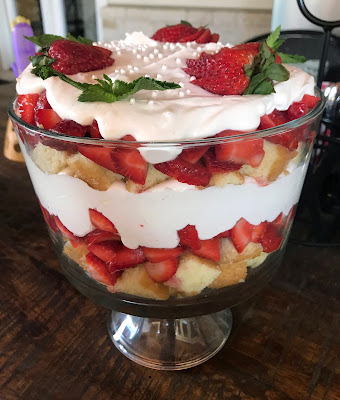 I wasn't sure what my contribution to Mother's Day dinner would be until a strawberry shortcake was requested.  Normally strawberry shortcake is a pretty involved affair, with multiple separate cakes and a complex layering process to be repeated over and over.  It's not such a big deal if there's four or less people, but when you get above six, it can feel like forever before you get to your own dessert.  I decided to try making a trifle, which means just one layering process, and then dessert is ready!  The trifle was absolutely delicious, everyone was a fan, and I especially liked the cream cheese in the whipped cream.  I'll definitely make this again.

Note: When I took the cake out of the oven, I poked it all over with a toothpick and then I brushed it with Licor 43 (Cuarenta y Tres), a vanilla-flavored liqueur.  Absolutely not necessary, but I love to gild the lily a bit now and then.


In the bowl of an electric stand mixer fitted with the paddle attachment whip together butter, sugar and lemon zest until pale and fluffy. Mix in eggs one at a time then mix in vanilla. Add a third of the flour mixture and mix just until combined then add in half the sour cream and mix just until combined, repeat with flour and sour cream once more then end by mixing in last third of the flour mixture and mixing just until combined (scrape down bowl to ensure it's evenly combined).
Pour and spread batter evenly into prepared baking sheet. Bake in preheated oven until toothpick inserted into center comes out clean, about 20 to 24 minutes.

Remove from oven and cool completely on a wire rack. Once cool, cut into 1-inch cubes (you'll have some leftover cake which you can chill or freeze and serve later with more fresh fruit and whipped cream).

For the strawberry layer:

For the cream layer:

Place a layer of cake cubes in the bottom of a trifle dish. Add half of strawberries over the cake. Spoon half of cream mixture on top of strawberries and smooth to the edges of the bowl. Repeat layering process once more.

Garnish with fresh strawberries. Serve within an hour for best results (the cake can be made a day in advance and covered, just wait to prepare the cream mixture and strawberries until almost ready to serve).
Posted by Sara at 5:42 PM

It looks so yummy... Can't wait to try it