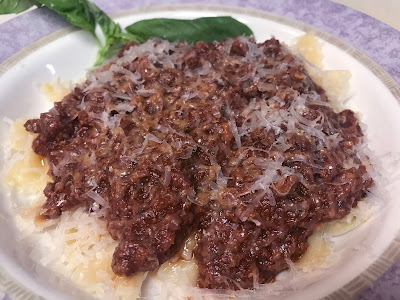 I know whenever I start an Alton Brown recipe that it's probably going to a major production, but it's going to turn out something pretty spectacular.  After all, this is the king of scientific recipe testing, so he's going to make sure the techniques are on point.  And this spaghetti sauce recipe is no exception.  This pot of deliciousness bubbled away on my stove for hours, and the result is a scoop of meaty goodness that really packs the umami punch.  You need plenty of slurpy noodles to nestle this delicious sauce, and freshly grated Parmesan is also required.

Place an 8-quart Dutch oven over low heat and add the bacon. Cook slowly until the bacon is crispy and has rendered its fat, 25 to 30 minutes. Remove the bacon from the pan for another use. Add the onion, salt, and pepper and stir to combine. Place the clove and star anise into a small spice bag, add to the Dutch oven and stir to combine. Cook, uncovered, over low heat, stirring occasionally, until the onions caramelize, 45 to 60 minutes. Add the celery and the 3 cloves of minced garlic to the pan and continue to cook over low heat until the celery is semi-translucent, approximately 30 minutes. Remove the spice bag from the pot.

Meanwhile, place a wide 4-quart saute pan, over high heat. Add 1 tablespoon of the olive oil and once it shimmers, add the beef chuck and the pork butt and cook, stirring frequently, until the meat is well browned, 4 to 5 minutes. Transfer the meat to a colander to drain. Return the pan to high heat, add ½ cup of the wine and deglaze the pan, scraping up any browned bits from the bottom of the pot. Transfer these bits and any remaining wine to the Dutch oven along with the meat.

Add another ½ cup of the wine, evaporated milk, beef broth, and mushrooms to the Dutch oven and stir to combine. Cover and cook over low heat, stirring occasionally, for 3 hours.

Once the sauce has been cooking for 1½ hours, place the 4-quart saute pan over medium heat and add 1 tablespoon of olive oil. Once it shimmers, add the 2 cloves of sliced garlic and cook for 30 to 45 seconds or until fragrant. Do not allow the garlic to brown. Add the tomatoes, oregano, basil, and marjoram and cook until most of the liquid has evaporated, approximately 30 minutes. Add the remaining ¼ cup wine, tomato paste, ketchup, vinegar, and Worcestershire sauce and stir to combine. Decrease the heat to low and simmer for 30 minutes. Increase the heat to medium high; add the remaining 1 tablespoon of olive oil, and cook, stirring constantly, for 2 to 3 minutes.

Transfer the tomato mixture to the meat mixture and stir to combine. Simmer the sauce, uncovered, over low heat, stirring occasionally, while preparing the pasta.

For the pasta:  Bring the water and salt to a boil over high heat. Carefully add the pasta, stirring quickly to separate. Cover and return to a boil, being careful that the water does not boil over. Once boiling again, uncover and continue to cook until slightly less than al dente, 5 to 6 minutes. Drain in a colander.

Add the pasta to the meat sauce and cook, over low heat, for another 2 to 3 minutes or until the pasta is al dente. Add the Parmesan cheese and toss to combine. Transfer pasta and sauce to a serving bowl or individual bowls and serve.
Posted by Sara at 7:06 PM