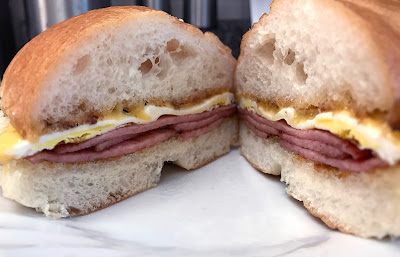 When I lived in New Jersey, I discovered an amazing breakfast sandwich that may still hold the record as most delicious.  I'm not sure why they're hoarding this particular breakfast food, but the world needs to know.  And they need to start exporting Taylor ham around the country.  Luckily, my little corner of the world is blessed with provisions.  And no, I don't want to think about what actually is in Taylor ham.  Let me keep my delicious ignorance.

Spread butter on cut sides of roll and toast until golden brown.  Set aside.

Cut a slice halfway through each piece of Taylor ham to prevent curling when cooked.  Fry in a skillet in some butter until starting to get brown marks.  Place ham slices on one half of roll.

Fry an egg in butter, breaking the yolk so that it will mostly cook through.  Lay a slice or two of Cheddar cheese on the egg when it's nearly done.  Season with salt and pepper.  Lay the egg over the Taylor ham and put the other half of the roll on top.  Try to eat without making indecent noises.
Posted by Sara at 8:57 AM