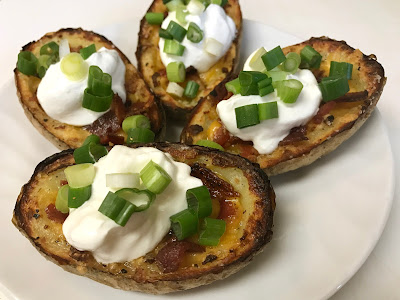 Okay, I gave in.  I never really watch the Super Bowl (except for the halftime concert), but I always enjoy an excuse to make delicious little appetizers.  They aren't really enough opportunities in life for appetizers.  And I could probably be okay with just having appetizers for dinner.  Especially when they're these delicious roasted potato skins, full of melted cheese and cool sour cream.  These are pretty much the pinnacle of appetizer goodness.  And I love having a recipe that turns out some fantastic skins, regardless of occasion.

Preheat oven to 400°F. Prick potatoes all over with a fork and rub with oil; season generously with salt and pepper.

Place potatoes on a rack set in a rimmed baking sheet. Roast until very soft when squeezed and skin is crisp, 60 to 75 minutes. Let cool.

Heat broiler to high. Halve potatoes and scoop out flesh (save for another use), leaving a ¼-inch border attached to skins. Brush both sides of potatoes with oil and season insides with salt and pepper; return to rack. Broil, turning once, until skins are crisp and flesh is golden, about 5-7 minutes per side.

Divide cheese and bacon among potatoes and broil until cheese is melted, about 2 minutes. Serve topped with sour cream, green onions, and black pepper.