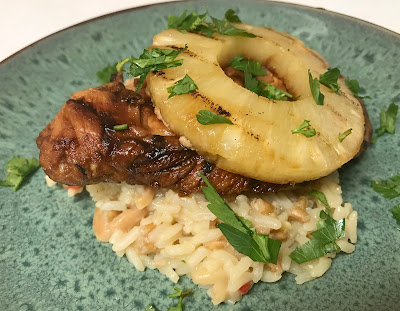 For some reason, I was reminiscing about restaurants that are no longer with us.  That have gone the way of the dinosaurs.  Some I don't really miss, but some make me sad.  Like Steak and Ale.  Going to Steak and Ale was a super big treat when I was kid because even though it was actually pretty reasonably priced, it was still a steakhouse, and my parents still had three children to feed.  I loved going to the salad bar and loading up my plate, but I also loved ordering chicken.  Yes, I know, I seem to have a problem with ordering chicken at steakhouses (hello, Alice Springs Chicken!).  At Steak and Ale, the chicken to have was the Hawaiian Chicken, a grilled marinated chicken breast topped with a grilled slice of pineapple.  Somehow in my wandering down memory lane, just somehow, I happened to stumble across a website where someone had the originally Steak and Ale kitchen cookbook and spilled the beans on the recipe.  So this is the real deal chicken, and I can vouch that it tastes just as good as I remember.  Serve it was some rice pilaf, and you've got a trip down memory lane.

Hawaiian Chicken
From Steak and Ale restaurant, as seen on Red Dirt Chronicles

Grill both chicken and pineapple and serve over rice pilaf (with green and red peppers and almond slices).

Other ideas with this marinade:
Instead of the pineapple, if you top the chicken with a slice of Provolone, shredded Colby cheese, diced tomatoes, and green onions, you have the Steak and Ale Southwest Chicken.

If you soak a 7-ounce center-cut sirloin in the marinade and grill it, you have the Steak and Ale Kensington Club steak.
Posted by Sara at 7:37 PM