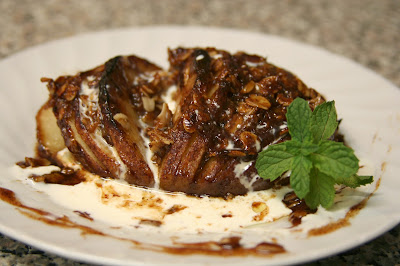 Well, it's the first official recipe of fall!  I wanted it to be pumpkin, but there's plenty of time for that yet.  I saw a very simple version of this recipe in Cooking Light magazine in September, but I knew the apples could be so much...more.  And none of this chintziness with the ingredients.  This is dessert, people.  Eat your salad for dinner, but when you're talking sweets, go big or go home.  I say it makes 8 servings, so that's half an apple per person.  Your mileage may vary.

Starting at the outermost edges, cut most (but not all) of the way through each apple half at ⅛-inch intervals. Place apple halves, cut sides down, in a 9x13-inch glass or ceramic baking dish coated with cooking spray. Combine ¼ cup brown sugar, 4 tablespoons butter, 2 teaspoons cinnamon, ground cloves, nutmeg, vanilla, and bourbon; brush mixture evenly over apples.

Cover baking dish with foil; bake for 20 minutes. Remove foil and bake for another 10 minutes or until apples are tender. Remove dish from oven and cool for 10 minutes.