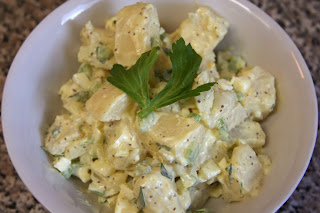 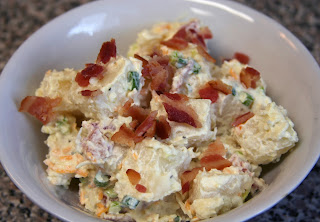 It's the fourth of July.  Also known unofficially as The-Day-You-Must-Grill-Or-You-Are-Un-American.  And if you're grilling, you need some fabulous sides.  Why should the burgers or ribs get all the glory?  It's time to go big or go home.  Luckily I know of two fabulous potato salads that would be beautiful next to your grilled glory. One even got me a marriage proposal.  True story.

Boil potatoes in their jackets and eggs until the potatoes are soft but firm. Let potatoes and eggs cool; peel and set aside eggs to chill. Peel and cube potatoes. Throw potato cubes in a large bowl. Whisk together oil and vinegar and toss with the potatoes. Sprinkle with salt. Refrigerate the potatoes until chilled.

For a Spring potato salad, substitute 8 medium red potatoes for the russet potatoes, ¼ cup chopped green onion for the white onion, and Dijon mustard for the yellow mustard.

Boil potatoes in their jackets until the potatoes are soft but firm. Let potatoes cool; peel and cube potatoes. Throw potato cubes in a large bowl and refrigerate.