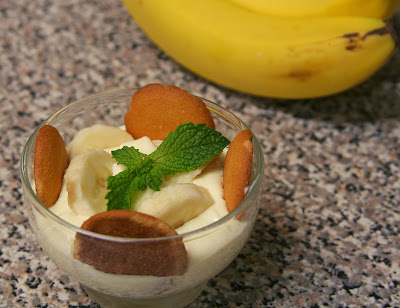 I once had a coworker bring banana pudding to a function.  I happily dug in.  I mean, who doesn't love banana pudding?  Disappointed that there were no bananas in my serving, I went back to see if I could find one in the serving dish.  Nope.  I mentioned the lack of bananas, thinking everyone else had nabbed them, and my coworker said that she didn't like bananas, so she didn't put any in.  Note: If you don't put any bananas in and only use vanilla pudding, it's not banana pudding.  My biggest pet peeve about banana pudding is the vanilla pudding thing.  I want my pudding to TASTE like bananas.  That's the point, right?  So I doctored up a Paula Deen pudding recipe to both make it more traditional (Chessmen cookies??  Nilla wafers or go home) and to make it more banana, less vanilla.  Nailed it.


Prepare pudding with only 2 cups of milk according to package directions (the package will call for 3 cups of milk - just use 2). Cover the hot pudding with a piece of plastic wrap, pushing the wrap down onto the surface of the pudding to prevent a skin from forming.  Refrigerate until cold.

Line the bottom of a 9x13-inch dish with enough cookies to cover and layer bananas on top. In a bowl, combine the cream cheese and condensed milk together and mix until smooth. Add the cream cheese mixture to the pudding mixture and stir until well blended. Fold 8 ounces (1 container) of the whipped topping into the cream cheese mixture along with the vanilla bean paste. Pour the mixture over the cookies and bananas. Spread the remaining 8 ounces (1 container) whipped topping over the pudding and cover with the remaining cookies or cookie crumbs. Refrigerate, covered, until ready to serve.