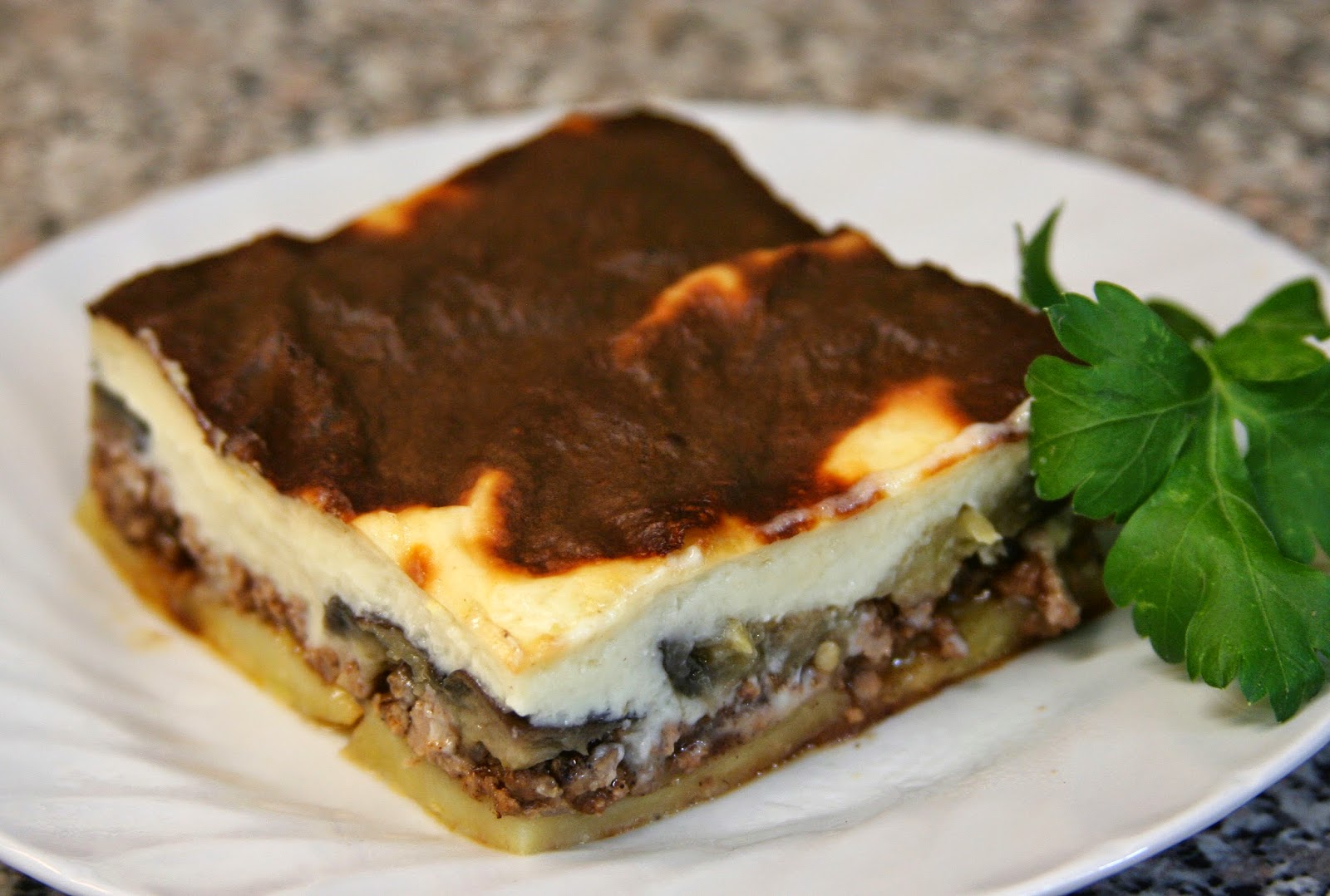 Eggplant and I have not always gotten along.  Apparently I am not alone in this.  But I was able to overcome my issues with eggplant thanks to a fabulous little Greek casserole I had while traveling in Europe.  Called moussaka.  No, I wasn't sure what was in it before I tried it.  Probably best.  But I can confirm that it's meaty, creamy, starchy, and all-around fabulous.  And it may just convert some eggplant-phobics in your life, too.

Preheat the oven to 425°F. Remove the ends of the eggplants and score them lengthwise in 4 to 6 places, then cut crosswise into ½-inch-thick slices. Arrange on a wire rack and salt both sides lightly. Let drain for about 1 hour, then pat dry.

In a bowl, combine the eggplant slices and the ½ cup olive oil. Toss to coat the slices evenly, then arrange them on a heavy baking sheet in one layer. Season both sides with salt, using a total of 1 teaspoon. Grind some pepper over the top and bake until the eggplant is tender, 20 to 25 minutes.

Peel the potatoes and slice them ⅜-inch thick. Toss them in a bowl with the 2 tablespoons olive oil, 1 teaspoon salt, and a few grinds of pepper. Arrange them on a heavy baking sheet in one layer and bake until tender, 20 to 25 minutes. (You can bake them at the same time as the eggplant.)

Whisk the béchamel until smooth and no longer stiff. Whisk in the egg, egg yolks, cheese, yogurt, and nutmeg to make a custard topping.

In a 15x10x2-inch baking dish, arrange the roasted potatoes in a single layer. Top with the lamb filling, compacting it into an even layer with the back of a wooden spoon. Top with the roasted eggplant slices in a single layer. Dollop the custard topping on top, then spread gently into an even layer. Set on a baking sheet and bake until well browned and set but still quivery, 45 to 50 minutes. Let cool for at least 45 minutes before slicing.

In a large, heavy pot, melt the butter over medium-low heat. Whisk in the flour all at once and cook, whisking constantly, until the mixture just begins to darken and smell nutty, about 3 minutes.

Add 2 cups of the milk to the pot and whisk until smooth. Add another 2 cups and whisk again until smooth. The mixture will look like creamy mashed potatoes. Whisk in the remaining 3½ cups of milk and 1½ teaspoons salt. Bring to a boil, reduce the heat to low, and cook for 20 minutes to eliminate the raw flour taste. Stir frequently with a wooden spoon to prevent the sauce from scorching, and scrape the sides of the pot occasionally with a heatproof rubber spatula.

Transfer the sauce to a large bowl and cover loosely with plastic wrap. Let cool.

Pour the olive oil and the onions in a large skillet. Sauté over high heat until the onions soften slightly and begin to smell sweet, about 4 minutes. Do not allow them to color. Add the ground lamb and sauté, breaking up the meat with a wooden spoon, until the lamb is no longer pink and there are no clumps, about 3 minutes. Continue cooking until the meat releases its juices, 2 to 3 minutes longer. Drain in a colander set over a bowl. Return the meat to the skillet. Let the juices settle for about 5 minutes, then skim the surface fat with a soup spoon and return the skimmed juices to the skillet with the lamb.

Add the tomato paste, honey, bay leaf, allspice, nutmeg, cinnamon, ½ tablespoon salt, and several grinds of pepper. Simmer gently, uncovered, stirring occasionally, until all the liquid has been absorbed and the meat is moist but not soupy, about 10 minutes. Remove the bay leaf.
Posted by Sara at 3:41 PM