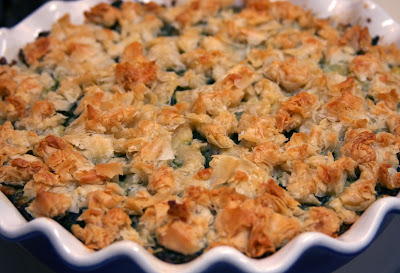 Ah, spanakopita.  Such a delicious nectar of the gods.  And such a pain in the rear to make.  I mean, seriously, who has the time to fold all of that phyllo dough into perfect little triangles??  Well, maybe I could, but I much prefer this incarnation.

More of a casserole than a pie, this is a great dish for a potluck (which is where this one went), especially if you fear that there may be a lack of vegetables.  This way everyone gets their greens and they actually taste good.

In a large nonstick skillet, heat 1 tablespoon butter over medium-high heat. Add onions, and cook, stirring occasionally, until translucent, 3 to 5 minutes. Add garlic and 1 teaspoon salt; cook until garlic is tender, 1 to 2 minutes.

Melt remaining ¼ cup butter in a small bowl.  In a large bowl, gently toss sliced phyllo to separate, then toss with melted butter until coated.

Cover the top of the pie evenly and completely with the topping. (To freeze, cover pie tightly with plastic wrap, being careful not to flatten topping. Bake within 3 months; do not thaw first.)

Preheat oven to 375°F. Bake until heated through and topping is golden brown, about 1 hour 15 minutes for frozen pie (30 minutes for unfrozen pie).
Posted by Sara at 9:43 PM