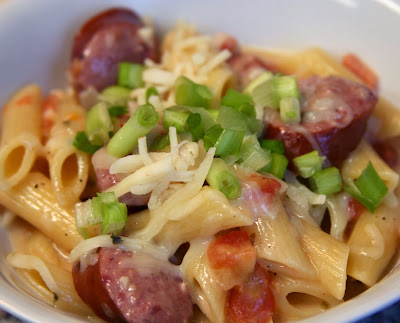 Okay, lately pinterest seems to be blowing up with this pasta dish.  Everyone raves about it.  It's the best thing since sliced bread.  Someone's husband wants it every night for dinner for the next three years.  Nothing could be more spectacular.  Okay, I'm kidding about the last one, but I think I saw the other stuff.

Of course I had to try it, with that many people practically wetting their pants over it.  I think it originally comes from Cook's Illustrated, which I normally shy away from.  I know lots of people think that magazine is like God's gift to the world, but I've never found their recipes to be particularly enticing.  Eh, it's worth a try.

Well, first of all, this pasta is not spicy.  Unless you live in Massachusetts.  If you live in Texas, you're going to have to do some work.  Like use a can of hot Ro-Tel and dump some Tony Chachere's in the darn thing.  Second, the sauce does not come together until it sits on the stove for a bit.  So leave it alone for about ten minutes before serving.  Other than that, it's just a basic dinner entree.  What's all the fuss about?

Add olive oil to an oven-safe skillet over medium high heat until just smoking. Add sausage and onions and cook until lightly browned, about 4 minutes. Add garlic and cook until fragrant, about 30 seconds.

Add broth, tomatoes, cream, pasta, salt and pepper and stir. Bring to a boil, cover skillet, and reduce heat to medium-low. Simmer until pasta is tender, about 15 minutes.

Remove skillet from heat and stir in ½ cup cheese. Top with remaining cheese and sprinkle with scallions. Broil until cheese is melted, spotty brown, and bubbly.