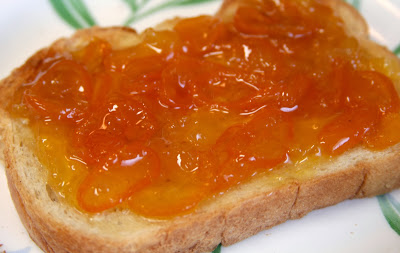 I still remember my first kumquat.  I was stalking the produce aisles of Central Market, and I came to that section where they keep all the weird stuff that most people can't identify.  Of course this draws my attention, because I'm nosy like that.  The first thing I see are these tiny little oval oranges.  So I have to have them.  No clue what I'm going to do with them, but that comes later, right?

I ended up just eating that first small bagful, but I knew the kumquats were meant for so much more.  So when they appeared once again this week, I dug myself up a recipe that would allow me to enjoy these beauties all year long.  Sweet, sour, sticky, and now dolloped in my car's cup holder as I tried to maneuver my toast and coffee and fifteen bags in time to catch the bus, it was very much worth it.

Wash kumquats thoroughly.  Cut each kumquat into very thin slices, discarding seeds.  Put kumquat slices into a large pot and mix with the sugar.  Pour in the orange juice/water mixture and stir to combine.  Bring to a boil over high heat, then reduce heat to medium.  Cook kumquats until syrupy, about 45 minutes.