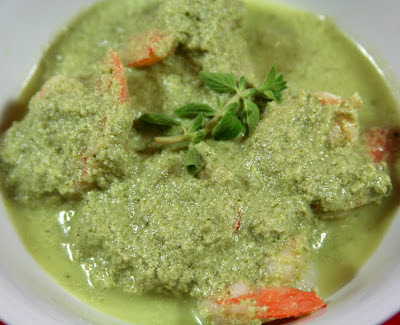 I wanted to make a meal for my mother and father this weekend, but with my mother being a diabetic and me being on a diet, the menu was going to be complicated.  As much I wanted to make something that involved a giant pile of creamy mashed potatoes, I held back.  Yes, I have willpower of steel!

The sauce is pretty easy to make, but I found that it tends to break VERY easily.  And since it can be difficult to coax my parents to the table on time, I had to keep trying to re-integrate the ingredients with more stock.  Not fun.  The sauce was pretty delicious, however.  Salty and nutty, so it was a perfect match with the large Gulf shrimp I got.

Heat a skillet over medium heat and toast the pumpkin seeds, stirring and tossing constantly, until they're puffed and just slightly browned, 5 to 8 minutes.  Put the pumpkin seeds in the blender jar along with the onion, chiles, garlic, oregano, cumin, salt, and 2 cups of the stock, and blend until the mixture is smooth, at least 3 minutes.

Heat the oil in a 4- to 5-quart heavy pot (this will give you enough room to add the meat or fish later; if you're making just the sauce, a 3- to 4-quart pot is fine) over medium heat until it simmers, and carefully pour in the blended mixture.  Cook (use a splatter screen so the sauce doesn't make a mess of the stove), stirring, until thickened, about 5 minutes.  Add just enough stock to thin the sauce to a velvety consistency that thickly coats a wooden spoon, but isn't gloppy.  Simmer, partially covered, for 20 minutes, adding more stock, as necessary, to maintain the velvety consistency.

Return some of the sauce, about 1 cup (or all if the sauce has broken and looks like scrambled eggs), to the blender, then add the cilantro and blend until smooth.  Be careful when you're blending hot ingredients: cover the top with a kitchen towel, and hold the top firmly in place with your hand.  Work in batches to avoid blending with a full jar.

Return the sauce to the pot and simmer, uncovered, 5 minutes more.  As the sauce is simmering, swish a little liquid around in the blender and add it to the pot.  Season to taste with additional salt.

If you're using chicken or pork, add it to the sauce now, reduce the heat to low, and cook until it's just heated through, 15 to 20 minutes.  If you're using shrimp or fish, season it with salt, gently cook it in the sauce until just cooked through, about 10 minutes, and serve with lime wedges.